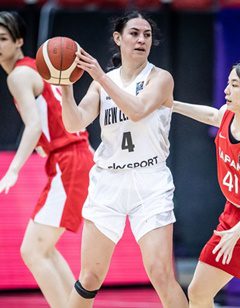 Played all 5 games at the 2021 FIBA Asia Cup in Jordan averaging a team high 4.0 assists per game.

Made 3 appearances for Waikato Wizards in the 2021 NBL season before a Covid enforced shut down.

In her three seasons with the Bears she started 87 games, tallying 564 points and 378 assists. She helped guide the Bears to the Big Sky Tournament Conference title and an NCAA Tournament appearance in 2018.

Then transferred to Washington State University to link up with sister Charlisse. Received All-Pac 12 Honourable mention after leading the league in assists (109) and averaging 9.8 points per game in the 2020-21 season.