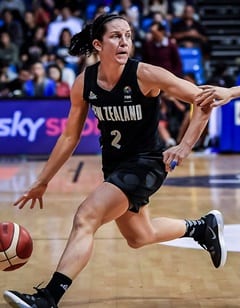 Debuted for the Tall Ferns in 2005 and went on to play for NZ at the 2008 Beijing Olympics.

Cocks is the only Tall Fern to have played at both the 2006 and 2018 Commonwealth Games. Won a silver medal in Melbourne and a bronze on the Gold Coast.

Was named to the All-Star Five at the 2019 William Jones Cup, where NZ finished runners-up, after averaging 17.2ppg.

She was the Tall Ferns leading scorer at the 2019 FIBA Asia Cup averaging 10.8ppg. Played all three games at 2019 FIBA Olympic Qualifying Tournament in Auckland

Was part of the 2018 Tall Ferns 3×3 Gold medal winning team at the FIBA Asia Cup in China.

Cocks is a three-time Australian WNBL Championship winner with the Townsville Fire.

Cocks played her eighth consecutive season with the Fire in the 2018-19 season.