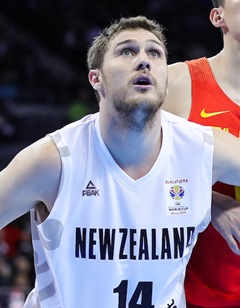 Averaged 8 points and 5.1 rebounds during the FIBA World Cup Asia Qualifiers and along with Jarrod Kenny the two were the only players to appear in all 12 games.

Was a member of the bronze medal winning team at the 2018 Commonwealth Games averaging 9.4ppg and 5.0rpg.

In 2009, in his final year at Westlake Boys, Loe performed outstandingly at the FIBA U19 World Championships in Auckland. At just 17 years – the youngest member of the team – he led the Junior Tall Blacks in scoring averaging 18.8ppg.

He debuted for the Tall Blacks when the team beat Australia to win the 2009 FIBA Oceania Championships.

Spent four years at St Louis University playing 133 games for the Billikens. After College he spent a season each at KAO Dramas (Greece) and Limburg United (Belgium)

Spent two seasons at New Zealand Breakers before joining Cairns Taipans for the 2018/19 NBL season. Has re-signed with the Breakers for 2019/20.

Won a NZNBL title with the Wellington Saints in 2019 picking up the Stan Hill Award for Most Outstanding New Zealand Forward.

At the end of the 19-20 ANBL season, Rob signed with the Kagawa Five Arrows in the Japanese B League, where former Tall Blacks Head Coach, Paul Henare, is at the helm.