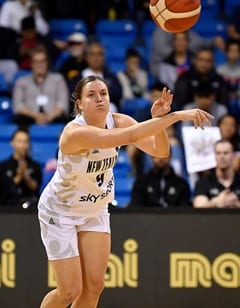 Played for Melbourne Boomers in 2019/20 Australian WNBL – team were beaten semi-finalists and has resigned for 2020/21.

Began her professional career playing for Townsville Fire in the WNBL in 2018/19.

Beck enjoyed a standout career at St Mary’s College, California where in 2018 she was named first team All-West Coast Conference for the second time in her career after leading the Gaels in scoring, steals and free-throw shooting in her final collegiate season. She was also named to the WCC All-Academic First Team for the third time in her career. Beck finished her career 10th on the all-time scoring list at Saint Mary’s with 1,439 career points.

Prior to college Beck won back-to-back National Secondary School Championships at Hutt Valley High in 2010 and 2011.