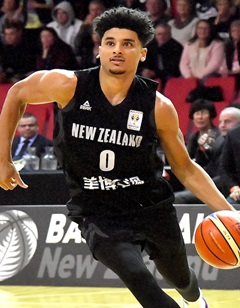 Averaged 13.4 points, 4.2 rebounds and 4.8 assists at the 2019 FIBA World Cup in China – third in scoring and second in assists for the Tall Blacks at the tournament. It was his second World Cup after also playing at the 2014 event in Spain.

Webster played six games for the New Zealand Breakers in 2012 -13 and a full season with Waikato Pistons in 2013 before embarking on his college career at Nebraska University. He played 124 games for the Cornhuskers enjoying a stand out 2016-17 senior season averaging 17 points, 5 rebounds and 4 assists per game.

In 2017 he played five games for the Golden State Warriors at the NBA Summer League, before signing a professional contract to play for Fraport Skyliners in Germany.

After one year in Germany played in Turkey for Galatasaray in the 2018/19 season averaging 12.5 ppg.

Won a FIBA Under-18 3×3 World Championships in Italy in 2011 alongside fellow Tall Blacks Isaac Fotu and Reuben Te Rangi.