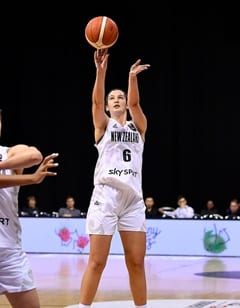 Played all 5 games at the 2021 FIBA Asia Cup where she averaged 7 points and 4.2 rebounds per game.

Began the 2021 NBL season with 34 points and 21 rebounds against Harbour Breeze.

Began her professional career in 2018 playing in Malaysia for the Hatchers club.

Mother, Jane, and sister, Kate McMeeken-Ruscoe, both played for the Tall Ferns