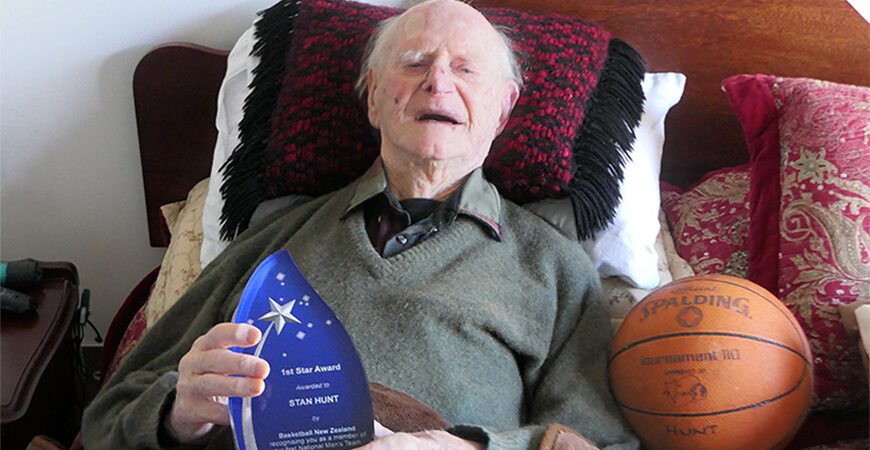 Hayman, one of the pre-eminent players in New Zealand in the post-war years, was the captain of the first ever Tall Blacks team selected in 1947. The feat is something BBNZ wants to acknowledge along with his teammates from that side.

Following the awards, BBNZ determined that all members of our first Tall Blacks and Tall Ferns teams will be recognised as recipients of the First Star Award (this award is not part of the official awards list as it is only presented to inaugural members of the national teams).

The 1947 team was selected following the National Championships that were held in Wellington and won by Auckland.

The full team was:

Stan Hunt was the first member of the 1947 team to collect a First Star Award when he received his earlier this year prior to his passing.

He played predominantly for Auckland and PYCC, but also enjoyed a spell with Otago while studying at Otago University.

On top of playing until he was 70, Hunt also passed his love for the game on to his son, Stephen, who after playing remained active in coaching school and rep teams until his mid-60s.

Hunt was presented with his First Star Award at a family gathering in July and by all accounts proceeded to reminisce about the pleasure he had from playing basketball.

The first New Zealand Women’s National team was selected in 1949 and led by Dot Swabe. The diminutive guard also captained the New Zealand softball team in the same year.

The full team was:

Roma Ropeha played her representative basketball for Canterbury. Daughters Leone Patterson and Lynnette Bradnam also played for the Tall Ferns. Patterson is one of just nine players to have represented the Tall Ferns on over 100 occasions.

Dot Birks daughter, Di Robertson, went on to captain New Zealand and in 2010 was inducted into the Hawke’s Bay Sports Hall of Fame.

Unfortunately, BBNZ has been unable to contact all members of the original Tall Blacks and Tall Ferns and is now seeking the help of the country’s basketball community.

If you or someone you know could help with contacting a member of either side or their family, we please ask that you pass on that information to David Huxford so that they can recognised with a First Star Award.

Although the Tall Black and Tall Ferns nomenclature was not introduced officially until many years later, as these were the original New Zealand representatives the national organisation has recognised these players as the first Tall Blacks and Tall Ferns.