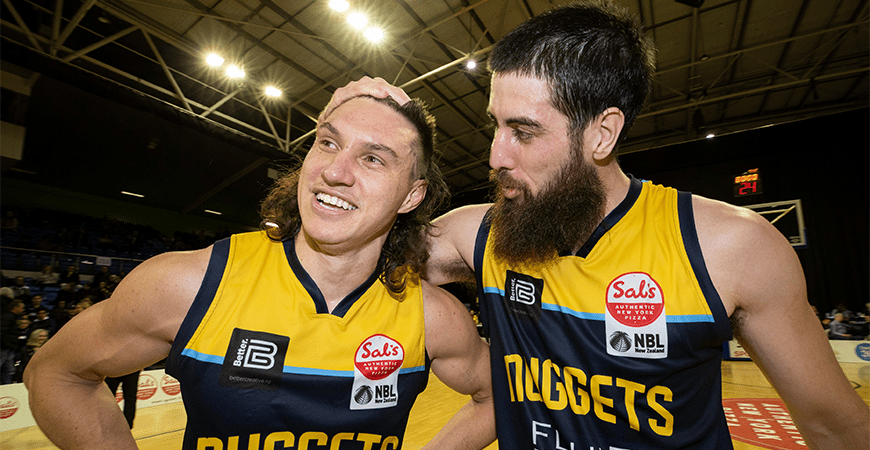 A wise man once said, “good things come to those who wait”, and this adage now applies to Tall Black Jarrod Kenny.

After 19 seasons in the NZNBL, Kenny can finally call himself an NZNBL champion after he and the rest of the Fluid Recruitment Otago Nuggets won the Showdown earlier this month at The Trusts Arena.

Better known as ‘JK’, Kenny is one of the most highly respected and well-liked figures in the New Zealand basketball community.

The guard was in the thick of everything during the Grand Final, as the Nuggets clawed their way past the Manawatu Jets 79-77 to win the franchise’s maiden title.

One of the senior figures in the Sal’s NBL, Kenny first appeared in the competition back in 2002 when suiting up for the Harbour Heat whilst in his final year at Westlake Boys’ High School.

He remained with the Heat while studying physiotherapy at Auckland University of Technology before moving to Hawke’s Bay to link up with the Hawks in 2009. Since then, Kenny has played every season bar two for the Hawks and racked up almost 200 games.

He had a season with Nelson Giants in 2016 and of course this season, with the Hawks non-entry into NBL ‘20, he submitted his name for the NBL Draft. As it transpired, the Nuggets and Kenny struck gold.

The Nuggets selected the 19-season veteran as their second pick (14th overall), pairing him with fellow Tall Black Ngatai and a raft of talented teammates.

Kenny admits that declaring for the draft wasn’t a straightforward decision.

“There were a lot of concerns going into the NBL season, but a lot of those concerns were addressed. I’ve been happy to be a part of it all and I’m stoked to have finally won a championship after 19 seasons.

“I’ve thoroughly enjoyed it [playing in the Sal’s NBL Showdown]. Everything about these six weeks has been different but I’ve enjoyed every minute of it.”

It’d be fair to say Kenny is used to things not being so simple.

His dream of playing for the Tall Blacks took a long time to reach fruition. As his career began to blossom, Kenny had an abundance of quality point guards ahead of him in the pecking order.

Early in his career, it was Mark Dickel, Judd Flavell and Paul Henare and then the likes of Lindsay Tait, Mike Fitchett and Jeremy Kench blocked his path.

He finally got his opportunity to don the Tall Blacks singlet in 2009, after his eighth season in the NBL, and has gone on to make 70 appearances for the national team.

His break into full-time basketball would take another six years to materialise. It was not until 2015 when the Perth Wildcats came knocking that he got his chance to play in the Australian NBL.

He won back-to-back championships with the Wildcats in 2016 and 2017 before signing with Cairns, helping the Taipans to the Final Four in 2020.

Kenny recognises that at times the NBL road has been a little rocky for the Nuggets and he is proud to be part of their revival.

“They did everything they could to get back in the League, Ange (Angela Ruske) and her team did an amazing job to get there.

“It wasn’t straight forward, there were three teams that didn’t participate for different reasons.

“I’m happy for all the boys, we had a great team. In the final and through the six weeks they’ve shown what they were capable of and I’m proud of every single one of them.

“I can’t say enough about the team we had and the group we had from the top down, from Ange, Brent (Matehaere) to number 84.

Referencing the 84th pick in the NBL Draft, Matt Bardsley, Kenny says “he deserved to be picked a lot higher than 84th”.

JK believes that NBL ’20 has been a huge success.

“Justin and his team at BBNZ have done an amazing job.

“I think basketball in this country has been overlooked for a long time and I feel getting this season’s NBL up and going has been awesome.

Approaching 35-years of age, some might assume Kenny may not have too many seasons left playing in the NBL. But he is one of the hardest working players you’ll meet, with an unrelenting dedication to health and fitness, so he just might surprise some yet. Whatever transpires during the remainder of his basketball career, the 2020 Sal’s NBL season will always hold a special place in his heart.