PREWSTER BACK IN BLACK TO TAKE ON BOOMERS AND GUAM 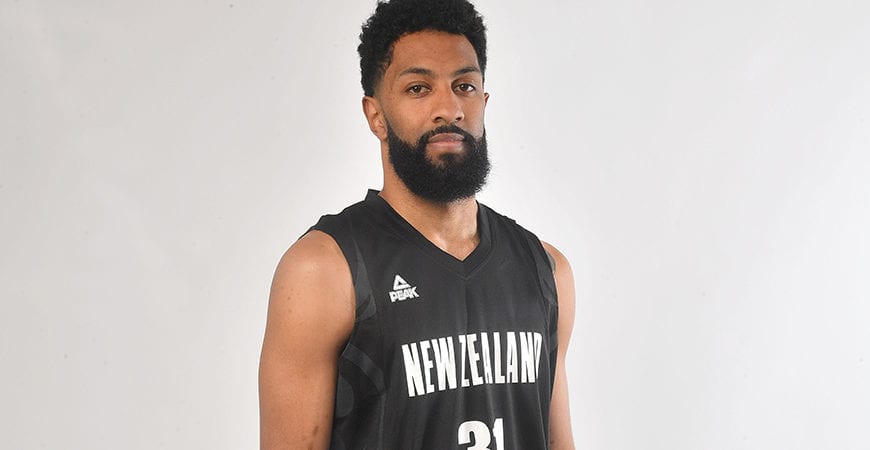 Dion Prewster may not have been top of everyone’s list when it came to the naming of the Tall Blacks roster for the upcoming FIBA Asia Cup Qualifying window, with games next week against Australia (20 February in Brisbane) and Guam (23 February in Guam), but head coach Pero Cameron had no hesitation in calling up the 30 year old, despite him not playing in the Australian National Basketball League.

“Dion has proven himself in this environment before, I have no doubt he will have prepared himself well and be ready to make a contribution to the group, on and off the floor. He showed when given the chance in the recent World Cup qualifiers that he has the skills required, but importantly he has the maturity to come in and perform the role we are expecting of him, without any fuss.”

So what has Prewster been up to in recent times and how ready is he to pull on the New Zealand singlet again next week?

“I had the opportunity to play in a couple of semi pro tournaments in Malaysia with a Sydney based club team ACBA Dragons. It was an eye-opening experience in terms of the style of Basketball and culture within Malaysia. I have also spent most of my off season working on my individual game in Sydney.

“I have been working out with Venoa Creed, founded by two athletes/mentors Hala Manoa and Goran Veg. I knew Hala from my Wellington Basketball and Hoop Club Wellington representative days. They are forward thinkers who think outside of the box to help their athletes not only develop physically but also mentally on and off the court.

“Working with Venoa has challenged my previous beliefs on how to train and help me realize that Intelligence is important to athlete development. Through Venoa I have been able to have exhibition games, weekly scrimmages, recovery sessions, and see different people from various medical professions.

“At the same time they have been able to offer me work on the side to help mentor and coach young upcoming athletes. Venoa is more than just two trainers. It’s a collective of athletes pursuing knowledge, sharing ideas and wanting to pass on that knowledge to help others reach their potential.”

Prewster is however wary of coming in with less actual game time than most of his teammates next week and is ready for those adjustments.

“Obviously not playing regularly can cause issues because you can’t simulate a team training environment and the physical challenges you face over the course of a season when training by yourself. But if you plan your training correctly you can maximize your training to peak at the right time.”

The combo guard admits he was not expecting the call from new head coach Pero Cameron but is delighted to once again represent his country.

“I haven’t been playing regularly so I was very surprised when Pero called about the upcoming tour. I’m very grateful however to have another opportunity to wear the black singlet and compete at the international level. Being a part of the Tall Black culture is very special.

“My role coming into to next week is being a supportive teammate and taking advantage of any opportunities that presents itself. I’m looking forward to having the chance to showcase the new skills I have accumulated over the off season.”

It is not the only announcement to have featured Prewster these past few weeks, with the news that he will return to his hometown Wellington Saints in the Sal’s NBL.

“Wellington is my hometown and when the opportunity to go back presented itself it was not hard to sign. I have been blessed to have had the opportunity to play in Nelson and Hawkes Bay in the last three years, however the highlight has been having Zico as a coach and being able to learn from him. He has a great basketball mind and being able to play for him has been a huge part of my decision to come back to Wellington. I’m also looking forward to playing in front of my friends and family.”

As he has already hinted in this interview, Prewster is not sitting idly by waiting for ‘retirement’ to catch him by surprise. While he is far from finished as a player, he is thinking of life on the other side of the white lines.

“At this point in my career I want to focus on developing my basketball knowledge for when I decide to step away from playing and step into the coaching side of hoops. Understanding various perspectives and philosophies, and helping round me fully as a person, player and as a coach.”