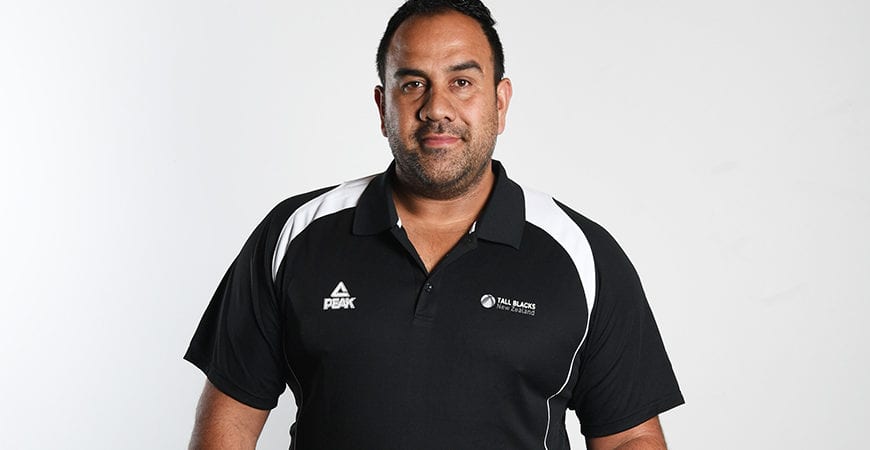 The Tall Blacks have a new coach. FIBA Hall of Famer and Tall Blacks legend Pero Cameron was officially named as head coach today by Basketball New Zealand. He succeeds his good friend and former teammate Paul Henare, who stepped down as Head Coach last month.

Cameron enjoyed a stellar career in the black singlet. Cameron’s highlight would have to be the 2002 FIBA World Championship, when the team finished fourth and Cameron was named in the All-Star Five, alongside four NBA superstars.

Since retiring as a player in 2010, 45-year-old Cameron has been constantly involved in coaching at a variety of levels including winning NZ NBL championships with the Wellington Saints (2010, 2011). For the past eight years, has worked as an assistant coach with the Tall Blacks, first under Nenad Vucinic and more recently working with Henare.

Since hearing the news from Basketball New Zealand CEO Iain Potter, Cameron has taken time to reflect on all that basketball has given him and those that have helped him along the way.

“I think back to when I first made the Junior Tall Blacks, I was about 16 or 17 at the time, so it is coming up 30 years representing the black singlet in one way or another. When I received the news, I thought about all the coaches I have worked with in that time, all the teammates and all the players that have represented our country. To be able to add to that Tall Black history and bring some more positive moments to that history is exciting, as we chase our goals.

“I am really happy. It has been a long time and a good time in this team and in this environment. I can’t wait to get into work with this current group, the players and support staff, and get into the challenges that face us in 2020.”

Cameron’s appointment is for now, short term, taking the team through to the Tokyo Olympic Games, with his contract covering the February FIBA window with Asian Cup qualifying games against Australia and Guam (both away), and then the Olympic Games repechage tournament in Serbia in June, with the winner only qualifying for Tokyo.

Cameron played at the Sydney and Athens Olympics, and knows how big an impact another appearance would have on the game.

“The Olympics is huge, not just for me, but for the players, the whole group and support staff and for the future of the game in New Zealand. If we can get back to the Olympics, it truly puts us on the map, to be competing with the best in the world in front of family, friends and the basketball community back home.”

Cameron brings his considerable playing experience, and a complete understanding of the culture around this team and what it means to pull on the singlet. That is something Cameron believes is critical throughout the coaching group and support staff as the Tall Blacks do things ‘their way’ on the global stage.

“Culture and understanding who we are is everything. Previous coaches like Tab, Keith, Nenad, Pauli – they were all part of the team as players or lived and worked in New Zealand for years and understood who we are as a people and how we do things. And as Kiwis it is important to understand that we do things differently to most other countries. Sometimes we have to due to a lack of time together or resource available to us as a team, but for the most part we have a style, we adjust to our competitors differently, we plan differently and as we showed at the World Cup, we do things our way to get the best out of our team. Culture underpins everything we do with this team, how we interact with each other and how we take on any other team in the world, regardless of reputation or ranking.”

While he will certainly put his stamp on the team, Cameron also believes that his appointment means minimal disruption to the playing group, allowing the good work of the past three years to carry on without interruption.

“Continuity is important to this group right now, the past few years has seen us bring in so many new and young players. From the Asia Cup to the qualifying windows, we have brought in many new players and exposed them to what Tall Blacks basketball is all about. It is important that we don’t lose that investment and go back to square one with a new system or new staff.

“Over that time we have also seen a number of players mature into their twenties and emerge as leaders of this team, players like Reuben Te Rangi, Shea Ili, Finn Delany, Isaac Fotu and Tai Webster just to name a few.

“We are also seeing the next generation emerge and put pressure on the current group. We have a whole batch of players ready to come out of the college system in the US and below them a group of 10 or 12 players ready to make the move from High School into the US college system, some of them have already had a taste of the Tall Blacks environment.”

Cameron does however know the value of leadership and experience in this group, as is the case with any team. When the time is right, Cameron will be making calls to those that have graced the team for a number of years and add value on and off the floor, players like Tom Abercrombie, Corey Webster, Jarrod Kenny and Mika Vukona.

“They are our leaders. They continue to be important to this team and what we want to achieve. They are vital to this team. We need these guys and want them to continue to be a part of the Tall Blacks programme, but for now they should be focused on their professional club commitments.”

Cameron says he wants the job beyond Tokyo and that for now his focus is solely on the February window and June qualifying tournament, but he does not want his contribution to end there.

“Of course, I want this job longer term, that is something out of my control though. I am just focused on the job at hand, the qualifying window in February and the Olympic qualifying tournament in June. I think all coaches want that long term security, but for now that is the hand I am given, and we will go and take care of business.”

Appropriately given the nature of the team, and the culture that permeates throughout the group and all those who have previously been a part of it, the final say from Cameron is for his own family.

“For me this is also about family and the support they have given me over many years. I am very proud right now and grateful for their support. To my wife and kids, my mum and dad, and brothers and sisters, everyone who has supported me in my career, I couldn’t have reached this moment without their support and understanding.”

Cameron will be supported by current Assistant Coach Ross McMains, who has reconfirmed his commitment to the team for 2020. Any other appointments will be decided and announced a later date.

Pero Cameron – By the Numbers