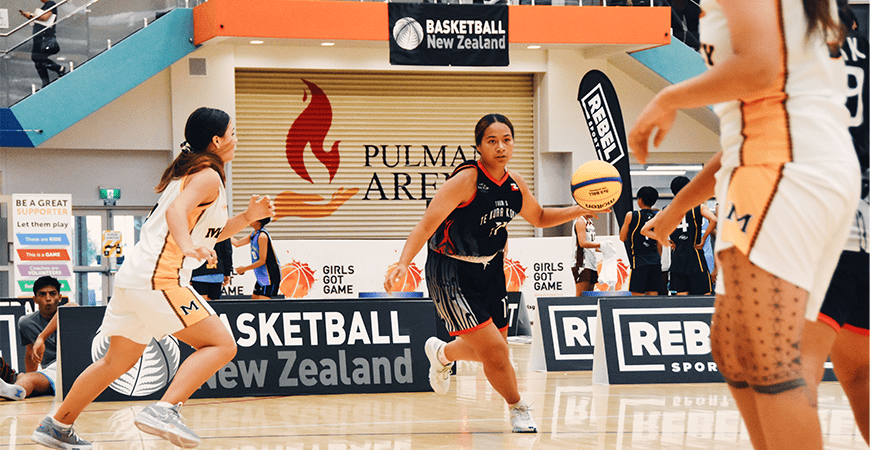 Day two of the Rebel Sport 3X3 Secondary Schools Champs is in the books and the alphas have separated themselves from the pack leading into tomorrow’s playoff fixtures.

The number of games played across a dozen courts at Pulman Arena bumped up to 217 and at the end of all of them there were only 11 teams with unblemished records across the four grades.

Out in front in the Junior Girls Elite grade is Hastings Girls’ High School and St Peter’s School, Cambridge. The two colleges have won all six of their contests so far and face off in the opening round of day three.

Casting our eye over the senior equivalent of the previously mentioned competition and it’s Fraser High School popping out from Pool A, while Te Aroha College is sitting pretty on top of Pool B. The Waikato-based schools have been impressive on court and are likely to feature at the point end.

Every side in the Senior Girls Elite grade has dropped a game, but it’s Baradene College and Hamilton Girls’ High School who hold the top seeds in their pool thanks to superior goal difference.

Aquinas College and St Peter’s in the Senior Girls Open division have been faultless with their results, as were Wellington High School and Hamilton in the Senior Boys.

In the Junior Open grades, Te Aroha College are the only squad yet to taste defeat in the boys and for the girls it’s Destiny School who own top spot with six victories.

Just like today, teams will back in the thick of it at 9am to round out pool play before the knockout stages begin for some of the grades in the afternoon (Junior Boys Elite, Seniot Girls Open and Junior Boys Open).

A live stream for the show court is also available from 10:30am onwards, with St John’s Eagles and Hastings from the Senior Boys Elite section being cast on the big screen first.

The draw, pools and key tournament information can be found here.

The live stream for this event is through Sky Sport Next available on YouTube from tomorrow onwards. For easy access, watch the stream at nz.basketball/tv.

Results from all today’s fixtures will be updated after each round and can be found at here.