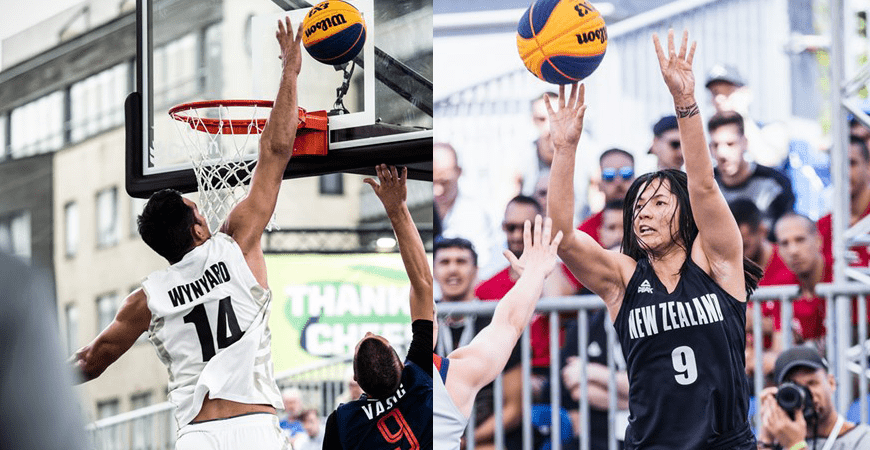 It’s been an exciting first two days for the FIBA 3×3 World Cup in Antwerp, Belgium with 20 men’s and 20 women’s 3×3 teams each playing two of their four allotted pool play matches – the best 3×3 squads in the world all fighting for a playoff spot and the chance to claim 3×3 championship victory.

Amongst these teams are the 3×3 Tall Blacks and 3×3 Tall Ferns, who both qualified for the 3×3 World Cup after going undefeated in the World Cup Qualifier tournament in Doha back in March.

In their first game, the 3×3 Tall Blacks impressed against no.1 seed Serbia – putting up a strong showing in their 19-21 loss.

Thanks to the inside presence of Tai Wynyard and Dom Kelman-Poto, combined with the outside shooting of Nikau McCollough and Jayden Bezzant and a strong defensive team presence, the Tall Blacks led for much of the game – going up 13-8 at one point against a clearly stunned Serbia squad.

Serbia were able to outscoring the kiwis 12-5 in the latter half of the game; even with the 3×3 Tall Blacks holding 19-13 rebounding advantage and a 4-1 difference in blocks.

Wynyard lead the 3×3 Tall Blacks with 9 points & 8 rebounds; Bezzant and McCullough with 4 apiece and Kelman-Poto with 2. Mihailo Vasic starred for Serbia, collecting 10 points on 8-10 shooting.

The 3×3 Tall Blacks dropped their 2nd game – a 21-13 defeat by France, who led from start to finish on the strength of their outside shooting (four 2-pointers) and smart cutting to the hoop; scoring 8 of the last 9 points to help put the game away.

Dom Kelman-Poto and Tai Wynyard each had 5 points & 5 rebounds; Tai also a menace defensively with two big blocks. Nikau McCullough scored 2 and Jayden Bezzant with 1, with the squad going 0-9 from outside the arc.

Antoine Eito top-scored for France with 10, including three shots from downtown. Remarkably, the French team only registered 1 turnover for the entire game, against 6 for the kiwis.

In their first game in Antwerp, the 3×3 Tall Ferns fought hard against a powerful United States squad – matching up well in the early going before a run by the US saw them win 19-14.

The game started with the kiwis keeping pace with the US; only 9-10 with four minutes left thanks to a 2 from Jillian Harmon. But the United States would surge ahead in the final minutes, thanks to the all-around skills of their WNBA player Lauren Cox (7 points, 5 rebounds) and Cierra Burdick (6 points, 5 rebounds).

Harmon led all scorers with 7 points on 5/7 shooting = including a trio of strong drives to the hoop – while Kalani Purcell had 4 points and 10 rebounds. Tiarna Clarke chipped in with 2, while Ella Fotu with 1.

The second game saw a tough loss for the 3×3 Tall Ferns, going down 10-16 to second-seeded France. France won this one on the strength of their outside shooting; going 4-8 from beyond the arc, while the kiwis went 0-8 from downtown.

The kiwis took an early lead thanks to an and-1 bucket by Jillian Harmon, with the scores soon locked at 4-all. But France would soon pull away thanks to its outside shooting, with both Marie-Eve Paget and Laetitia Guapo lighting things up from beyond the arc.

The 3×3 Tall Ferns were paced by Harmon with 4 points & 4 rebounds, Ella Fotu with 3, Tiarna Clarke with 2 and Kalani Purcell with 1 point & 6 rebounds.