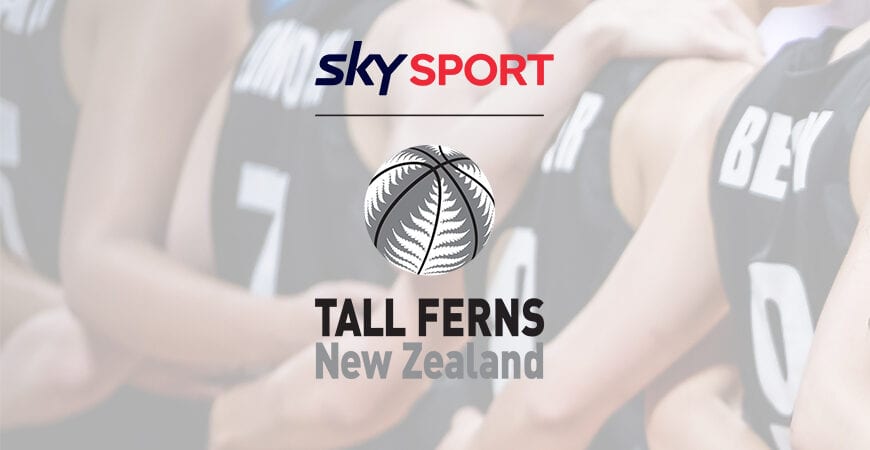 “As you may imagine, it’s been logistically challenging pulling this tour together given the way of the world, but now it’s here I can say we’re ready to go. A lot of preparation has gone into getting to this point, and I can’t wait to see the team get out on the floor for the first time in nearly a year.”

The Tall Ferns target for the Asia Cup is to finish in the top four to qualify for the 2022 FIBA World Cup Qualifier, which will be played in February 2022. Molloy is aware that it’s no easy task.

“This is the region’s premier event, every team there has worked hard to be there and will be taking it extremely seriously. Our group is a challenging one, Japan and Korea have won the Asia Cup more than any two teams ever, they have tremendous support behind them but so do we. We’re excited to take them on.”

*Team bios at end of release

The squad has been reduced from 14 to 12, with Ash Kelman-Poto and Micaela Cocks missing out on the trip. Kelman-Poto is still rehabbing from ankle surgery, while the COVID-19 impact on the tour, including quarantine on the way home, means Cocks will remain behind with her young family.

Drawn in Group A alongside Japan, Korea and India, the Tall Ferns need to finish in the top three in their group to have a chance to make it to the semi-final. Ranked 36th in the world, they are 34 places above group rivals India (70th), and behind Korea (19th) and Japan (8th).

Once they have arrived in Jordan, the team will settle into a training camp from 15-24 Sept, before the official FIBA Women’s Asia Cup bubble opens.

The tournament gets underway on Monday 27 September. The official schedule can be found here.

Was a member of the team that won the William Jones Cup in 2018. Recalled to the team for the 2019 FIBA Olympic Qualifying Tournament in Auckland.

Blair attended Rangitoto College, played representative basketball for North Harbour age-group teams and Harbour Breeze, and then spent 5 years in the States. She spent two years at Northeastern Junior College, Colorado before moving on to Idaho State University where she was a standout shooting guard for the Bengals.

Following university Blair has played in Australia and New Zealand.

Averaged a team high 14.6ppg for Brisbane Capitals in the inaugural NBL1 North competition in 2021.

Began the 2021 NBL season with 34 points and 21 rebounds against Harbour Breeze.

Began her professional career in 2018 playing in Malaysia for the Hatchers club.

Mother Jane and sister Kate McMeeken-Ruscoe both played for the Tall Ferns.

Was a member of the NZ team that won the William Jones Cup in 2018 where she averaged 11.4ppg and10.6rpg. Also played on the silver winning team at the 2019 event averaging 15.2ppg.

Played all three games at 2019 FIBA Olympic Qualifying Tournament in Auckland where she was the leading rebounder at the tournament averaging 11.3 boards per game. In addition she averaged 16 points per game to finish 4th in overall scoring.

Named to the All-Star 5 in 2019 WBC after helping Harbour Breeze to the Grand Final.

Began her professional career playing for Adelaide Lightning in the Australian WNBL in 2018/19. Played for Melbourne Boomers in 2019/20 and 2020 – the team were beaten semi-finalists both seasons.

Davidson completed her four year scholarship at the University of California, Berkeley in 2018. She played a total of 130 games for the Golden Bears averaging 5.7 points and 3.7 rebounds per game. Started all 64 games for the Bears in her final two years.

Was a member of the Tall Ferns team that finished runners-up at the 2019 William Jones Cup.

Following high school Goulding spent a year at Gillette College in Wyoming before being recruited by Fordham University.

Played for Bendigo Spirit in the 2020 Australian WNBL season.

Signed as a Development Player by Melbourne Boomers for the 2020-21 Australian WNBL season.

Played two games for the Canterbury Wildcats in 2021 NBL before Covid shut down the league.

Leading scorer at the inaugural NBL Schick 3×3 Cup in 2020 playing for Canterbury Wildcats.

Played on the New Zealand team that won silver at the 2017 FIBA Oceania Championships in Guam averaging 9.6ppg.

Hippolite is on a basketball scholarship at Lincoln University where she is studying for a Bachelor of Science (Food Science).

At the 2018 William Jones Cup she was named Tournament MVP after averaging 22 points per game.

Played all five games at the 2019 FIBA Asia Cup in India.

Played four years at the University of Hawaii making 121 appearances for the Rainbow Wahine. Was named to the Big West Conference All-Freshman team in 2013. In 2016 was MVP at the Big West Tournament where Hawaii were crowned Conference Champions. Finished her career with 1,167 points and led Hawaii in 3-pointers made for three straight seasons.

Debuted at 2018 Commonwealth Games where she became the youngest player ever to play for the New Zealand Tall Ferns at 16 years, 202 days. Averaged 11.3 points and 4.2 rebounds per game and was joint top scorer with 18 points in the bronze medal game against Canada.

Leger-Walker has played a considerable amount of age-group international basketball. In 2019 she was named to the Tournament Team at the FIBA 3×3 U18 World Cup in Mongolia where the New Zealand Team claimed silver.

She won multiple New Zealand junior titles with both St Peter’s School, Cambridge and Waikato Basketball. Remarkably she appeared in the Grand Final at Schick Secondary Schools Nationals in all five years in high school winning the championship on four occasions.

Scored in double figures in all but two games and 20+ on 12 occasions in her freshman year at Washington State University.

Debuted for the Tall Ferns in China in 2013.

In her three seasons with the Bears she started 87 games, scoring 564 career points and 378 career assists. She helped guide the Bears to the Big Sky Tournament Conference title and an NCAA Tournament appearance in 2018.

Then transferred to Washington State University to link up with sister Charlisse. Received All-Pac 12 Honourable mention after leading the league in assists (109) and averaging 9.8 points per game in the 2020-21 season.

Was a member of the 2018 Commonwealth Games bronze medal winning team averaging 6.3 points per game.

Was part of the 2018 Tall Ferns 3×3 Gold medal winning team at the FIBA Asia Cup in China.

Paalvast spent 5 years at Monmouth University, New Jersey graduating in 2014. In her senior year she averaged 13.2 points, 6.8 rebounds and 2.3 assists per game. She sits 7th on the all-time list of games played (121) for Monmouth and is one of just 17 players to have scored over 1,000 career points for the Hawks.

Paalvast then joined Micaela Cocks at Townsville Fire for the 2015-16 and 2016-17 seasons helping them win a WNBL championship in her first season with the club.

In 2017-18 played for Canberra Capitals where she was named Defensive Player of the Year and in 2020 suited up for Bendigo Spirit.

Played all three games at 2019 FIBA Olympic Qualifying Tournament in Auckland where she scored a career high 21 points against China.

Was a member of the 2018 Commonwealth Games bronze medal winning team averaging 5 points and 5.5 rebounds per game.

Purcell was the leading rebounder at the 2017 FIBA Asia Cup averaging 13.9 rebounds per game. In addition she averaged 10.3 points per game.

Purcell had a stellar career at BYU Provo where she was named to the AA-WCC Women’s First Team in 2016 and 2017.

Purcell became BYU’s single-season record holder in total rebounds (416) in 2016. In her final season she averaged 12.7 points and 10.5 rebounds per game earning the 2016-17 WCC Defensive Player of the Year award.

Has signed for the Sydney University Flames for the 2021-22 Australian WNBL seasons after four successive years with the Melbourne Boomers.

Was a member of the Tall Ferns team that finished runners-up at the 2019 William Jones Cup.

Played all 91 games for the Tritons in her three years on the team amassing 982 points and 430 rebounds.

Won a WBC championship with Otago Gold Rush in 2018.

Richards, playing for Gold Rush, was named to the 2020 NBL All-Star 5 after finishing as the leading rebounder in the League averaging 10.2rpg.

Averaged 8.2ppg and 6.6rpg for Rockingham Flames in the inaugural NBL1 West Conference in 2021.

At high school was a member of the John Paul College team that won three Australian National School Championships.

On return to Australia she has played WNBL for Canberra Capitals and Adelaide Lightning.

Has played the 2021 NBL1 North season with Logan Thunder.

Has signed for Wetterbygden Sparks (Sweden) for the 2021-22 European season.