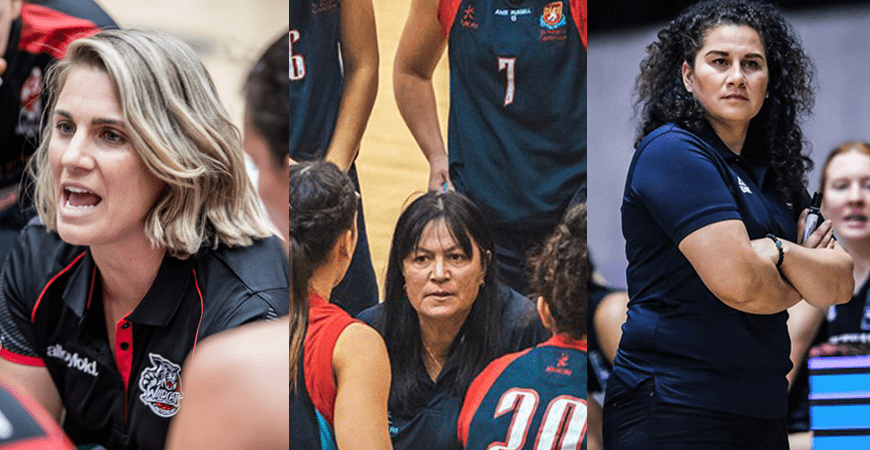 Basketball New Zealand (BBNZ) is pleased to announce the appointment of its three assistant coaches for the Sky Sport Tall Ferns side ahead of the 2024 Paris Olympics – with newcomers Leanne Walker and Mel Downer joining as assistants for the first time, alongside a returning Jody Cameron.

Leanne Walker joins the Tall Fern coaching staff following an illustrious playing and coaching career. Walker spent 13 years in the black singlet, which saw her compete at a World Championships and two Olympic Games (Sydney 2000 and Athens 2004), while also representing Waikato in the National Women’s Competition.

She was head coach of the Waikato Wizards in the Women’s NBL this year and also head coach at St Peter’s College, Cambridge – the latter winners of four of the last five Schick National secondary school championships.

Prior to this Downer held the role of BBNZ Talent Manager South Island, overseeing the development of Junior National Team athletes. Downer has also been head coach of the Canterbury Wildcats in the Women’s NBL, as well as the U17 Men’s NZ Team.

She served as assistant coach of the U17 Women’s NZ team that claimed silver at the 2019 FIBA U17 Oceania Championships, and was an assistant coach of the Australian Sapphires who won Gold at the 2017 FIBA U16 Asia Cup Championships and Bronze at the 2018 FIBA U17 World Cup. Downer was also Assistant Coach and Associate Head Coach of Basketball Australia’s Centre of Excellence Women’s Program at the Australian Institute of Sport.

In addition to her Tall Ferns position, Cameron was also the Women’s Development Officer and Head Coach for the Harbour Breeze in the Women’s NBL.

Sky Sport Tall Ferns Coach, Guy Molloy says that the incoming assistant coaches each bring an intriguing mix of skills and experience to the national side.

“I’m very pleased to have Jody back for the Ferns, and to have her joined by high-calibre coaches like Mel and Leanne gives me some added excitement for this team’s future,” says Molloy.

“All three assistants will be able to drive the team and continue building a positive culture, and their coaching experience across a range of competitions helps us to inject some fresh thinking into the side as well.

“I’m looking forward to working with Jody, Mel and Leanne as we rebuild this Tall Ferns side into a competitive, imposing side on the international stage.”