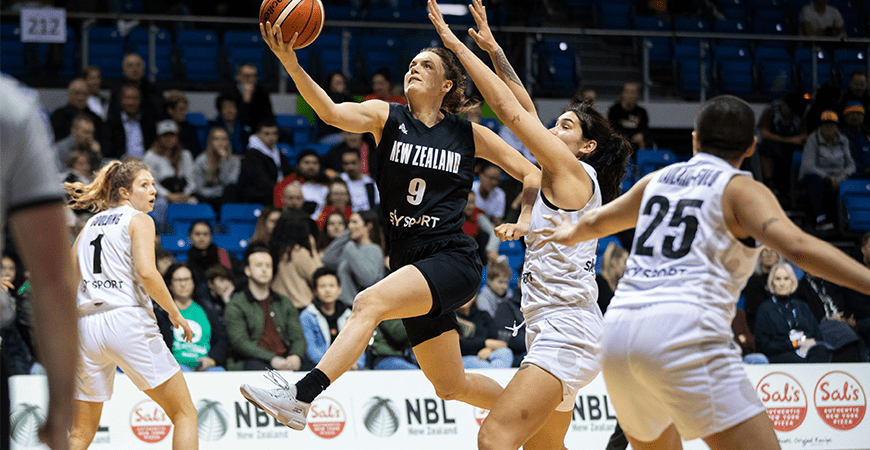 A dominant first-half performance from Team Beck propelled them to a convincing 91-62 win against Team Davidson in the Sky Sport Tall Ferns Showcase encounter at Trusts Arena on Saturday evening.

Davidson scored a dozen points for her team, Zoe Richards contributed 9 but Charlisse Leger-Walker was the standout with 23 points (8/15FG), 6 rebounds, 3 assists and 5 steals.

Team Beck led their opponents in all the major statistical categories winning the rebounding count 55-40, the assists tally 17-12 and the all-important shooting percentages (46% v 39% from the field.

A Fotu layup pushed Team Beck 11-5 ahead  – Reed’s triple adding another three to the margin.

Davidson demonstrated her inside skills but a neat finish from Zara Jillings extended Team Beck’s lead to 19-9.

Beck scored in transition on the quarter-time buzzer and her team were 29-17 ahead.

A Dalton steal and assist put Beck clear for the layup, the St Mary’s bound guard then landed from deep forcing Team Davidson Head Coach Jody Cameron to call a timeout with her team down 42-21.

It was one-way traffic as Ash Kelman-Poto, and Emme Shearer added to Team Davidson’s woes and when Jillings found nothing but net with her Hail-Mary effort Team Beck ended a dominant half 56-22 ahead.

Captain Beck led all scorers at the interval with 15 points.

Team Davidson started the second half in promising fashion via Kailahi-Fulu and Leger-Walker but Reed and Dalton stopped that abruptly with a couple of scorers.

Heremaia found West with a sweet assist as the lead swelled to 66-30.

Otago Gold Rush forward Zoe Richards scored 9 points in the quarter for Team Davidson but they faced a hefty deficit at the three-quarter mark trailing 73-41.

Tanaka Gapare, Helen Matthews and Leger-Walker added points to the Team Davidson score but Beck and Co had all the answers on the night.