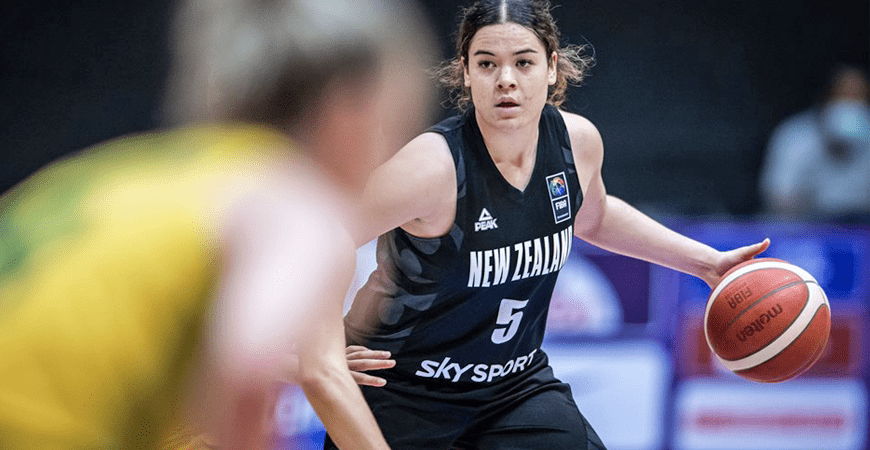 Basketball New Zealand (BBNZ) are excited to announce that the Sky Sport Tall Ferns will return to action in 2022, with a four-game tour of Australia planned for next month.

The squad assembles in Melbourne on 12 October for a training camp, before taking on a trio of Australian WNBL sides – the Southside Flyers, Melbourne Boomers and Bendigo Spirit – over four games from 15-24 October. The Tall Ferns will be hosted by the Sunbury Basketball Association, who count ex Tall Ferns head coach Kennedy Kereama as its Coaching Director, for their training sessions over the 12 days.

Head of High Performance, Chelsea Lane says that putting this tour together has been no easy task in the current environment.

“It’s been an incredible result to put this tour – and this squad – together at such short notice, especially after the multi-nation tournament we had previously planned wasn’t able to come to fruition,” says Lane.

“This tour hasn’t come without its challenges so it’s important to thank all the people behind the scenes who helped make it possible and gave their support, from those in the wider basketball community to the athletes themselves – it’s not always easy for people to step away from their lives for two weeks, so we thank them for making that sacrifice because they want to wear the black singlet for their country.

“This is an amazing opportunity not just for these young players but for the Tall Ferns programme itself, and of course it’s a great chance for the public to see our incredible women athletes in action this year.”

With the Tall Ferns unable to compete in international competition over the last 12 months – their last campaign being a fifth-place finish at the 2021 FIBA Asia Cup in October 2021 – Tall Ferns head coach Guy Molloy believes it’s vital that the team gets to play against quality competition in 2022.

“With the cancellation of other Tall Ferns events this year, we’ve been much later out of the starters block with regards to our preparations than we’d like to be,” says Molloy.

“And because this is the first year of our cycle – culminating in the 2024 Olympics – initially I was worried we’d end up [without any games played this year] so I’m thrilled this tour has come together. I’m excited by this squad too; it contains emerging players alongside several experienced veterans so I can’t wait to see them play and grow together.”

Molloy says that Covid, combined with New Zealand’s geography compared to other top basketball nations, has given the Tall Ferns limited opportunities within the past 24 months.

“The tyranny of distance has always been an issue for us, and typically we benefit greatly from any international competition we can play against. The FIBA Asia Cup in July 2023 is our pinnacle qualification event ahead of the Olympics, so having this Australia tour means we can go into next year with some international competition under our belt.

“It’s great competition too; these three WNBL clubs play in one of the top women’s leagues in the world. So this tour will help us to lay a foundation and give a ton more experience to our players, especially our emerging talent; it broadens our base so that we head into 2023 with a much better vantage point than what we would’ve otherwise had.”

The squad features several familiar Tall Ferns in Cocks (141 caps), Beck (47 caps) and Walker-Leger (27 caps at only 20 years old), as well as Taia and Hippolite – who both earnt their maiden caps at last year’s FIBA Asia Cup. With seven brand new players in the squad, Molloy likes the balance in age and experience on offer and expects the veterans to play a mentoring role.

“A few experienced players – including Penina Davison – who aren’t available for this tour, so it’s particularly important to have players like Micaela and Stella on board because of their past Tall Ferns experience; they’re not always the most vocal people, but it’s the power of their example that will help us.”

One of the players who may be unfamiliar to Kiwis is Pania Davis; a 6’6” centre who plays in the NBL1 West division in Perth. Although Davis has lived most of her life in Australia, she has Kiwi parents – and Molloy believes she is a ‘really good catch’ for the Tall Ferns.

“It was actually Rob Beveridge [Southland Sharks coach in the Sal’s NBL] who first gave me the first heads-up on Pania; she’s 6’6” which will make her possibly the tallest athlete to ever play for the Tall Ferns, and she’s only 19 years old. After talking with coaches over there and with Pania, we felt this is a great time to bring her into the Ferns and see her first-hand. Girls of that height are not abundant in New Zealand, so we’re hoping to see some exciting stuff from her as a player of the future.

“Typically we’re under-sized when we play internationally – with athletes like Penina and Kalani [Purcell] having to shoulder the workload for us down low in the past – and since neither player is available for this trip it’s a great opportunity for Pania to show us what she can do in that position.”

For Pania and the other debutantes in the squad, Molloy is keen for them to understand and adjust to the level of competition they will often face in international play.

“The speed of competition, the size of the athletes you’re playing against, this is all increased against what some of the youngest players have come up against domestically, so it’s important to acclimatise these athletes to the calibre of player they’ll be playing against.

“And then it’s also about building our team methods and culture so that we’re better prepared to tackle our opposition. It’s typical of a kiwi basketball team – the Tall Ferns in particular – that we need to rely on teamwork over individual talent and on hustle and putting in more effort than the other team does. We’ve been trying to make a big push over the past few years to develop our own style of play, one that focusses on the skills of the players – and I’m really keen to continue that.”

In choosing this squad, Molloy credits the presence of the GJ Gardner Tauihi league as a ‘huge’ opportunity for him to evaluate upcoming local talent. From the 12 athletes selected, nine of them played in the inaugural 2022 Tauihi season across four of the five teams.

“Year one of Tauihi was a raging success in my opinion, from the vision of the league itself to its delivery and execution. I watched every single game of the Tauihi season, and there’s a number of athletes who will make their Tall Ferns debut off the back of their domestic campaigns this year; players like Gabriella [Adams-Gavet] and Olivia [Berry] especially.

“That speaks volumes in itself for the importance of this league going forward, not just as a domestic competition but as a pathway to the national team and beyond.”

The Sky Sport Tall Ferns travel to Melbourne in October to face play four games against Australian WNBL teams. Details on how Kiwis can watch these games will follow shortly.