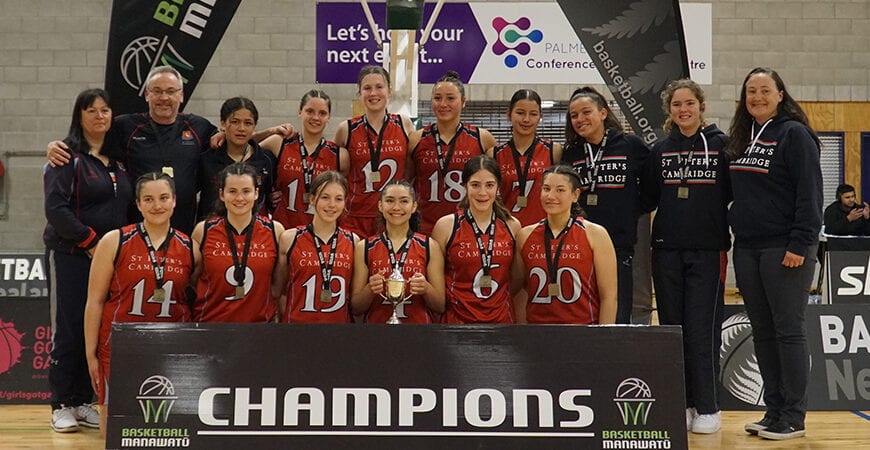 It was a one-point game (44-43) in favour of  Mount Maunganui with ten minutes to play but, with St Peter’s putting the defensive clamps on and Breeje Schuler scoring seven points on the bounce, the national champs were 51-46 ahead at the mid-point of the final period.

Payton Takimoana broke a five-minute Mt Maunganui scoring drought and when Rosalie Samia made a turn-around off balance three, the Mount were back in the hunt.

Hana Lacey-Rameka answered with a triple for St Peter’s as they maintained a five point lead with 2:20 to play.

A Tia Lassey bucket made it a two-point ball game before Taiana Day and Alana Paewai had the final say for St Peters.

Day scored a neat inside basket and Tournament MVP Paewai made a crucial play after Takimoana had once again made it a two-point game with 60 seconds to play.

Paewai came up with an important steal and followed it with a free-throw as St Peter’s closed out a narrow 62-58 win in a highly entertaining contest.

The tussle between forwards Vitolia Tuilave and Taiana Day was an intriguing affair and it was Day and St Peter’s ahead at half-time 28-25.

Back to back baskets from Micaela Fourie overturned a six point deficit, Mt Maunganui ahead 44-43 at the three-quarter mark before Schuler and Paewai made their telling contributions.

All the livestreamed games including the finals can be viewed here.