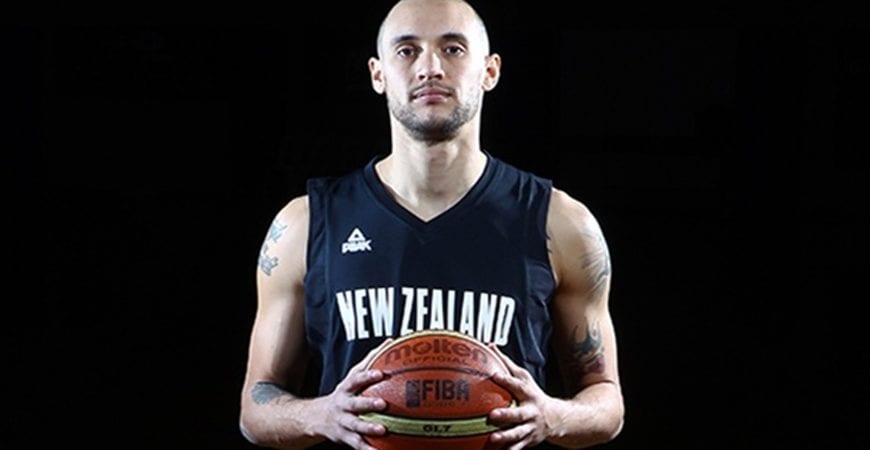 When the Tall Blacks team to prepare for a final tilt at qualifying for the Rio Olympics is named next week, there will be a name missing, a name that has been an integral part of the national team set up for the past 13 years with point guard Lindsay Tait today announcing his retirement from the international stage.

One of the most proud and staunch players ever to wear the black singlet, Tait wears his New Zealand heritage on his sleeve, a reflection of the pride he has in playing for his country through many campaigns, often as a part of the leadership group.

“Here am I, a skinny kid from West Auckland, I travelled the world playing the game with my friends, all experience I never would have had without the game. It is those memories and the relationships I will take with me, the people I hold closest to me in my life are my family and those in basketball,” said a typically down to earth Tait when reflecting on his decision.

Tall Blacks Head Coach Paul Henare paid tribute to a man he was proud to play alongside and then coach in recent years.

“Lindsay has had an outstanding international career – one that he and his whanau can be extremely proud of. For me it’s been great to see his growth from a raw teenager as teammates with the Auckland Stars to coaching him as one of the true leaders of our Tall Blacks team last year. Undoubtedly he will go down in history as one of New Zealand’s greatest players. I look forward to watching his progress as he enters the next stage of his life and career.”

Tait is a fierce competitor and a winner, having earned an amazing 7 New Zealand NBL titles (shared between Auckland teams and Wellington Saints) and is still performing with distinction, leading the Saints to the finals last season before returning this year to play for the Super City Rangers.

He is also a humble and by choice a quiet achiever, and had to be coaxed into some reflection on his international career but is comfortable that the time is right to move on to the next adventure.

“At my age and the way the game is evolving so quickly I have been on the fence a little while now with this decision. I am happy with the timing though, now I have processed it and talked to people close to me.

“Playing for New Zealand has meant so much to me, it will be hard to put in words but I will try. First and foremost I love basketball, and not being able to play at the highest level is a tough decision but it comes to all athletes.

“When I first made the team I didn’t realize how much it meant to be a Tall Black, but as I got older and understood what they stood for, I became so proud to be a part of that rich culture and history. I just feel lucky I was able to play with such a great group of people for such a long time.

“I didn’t know much about them until Pero (Cameron) came through and they shook up the world in 2002. Along with guys like Kirk (Penney), Mika (Vukona) and myself, we were able to try and pass down those lessons and try and do things a little bit better to give our small nation a chance to compete against world superpowers.

“The most memorable moment for me with the team would be beating Aussie in Wellington in 2009 to take out the Oceania title, that doesn’t come around too often, I will always remember that. For me as an individual it was to play against the best players in the world in 2014 when I walked on the court against the USA team, the best team and players in the world – that is something I am proud of. I can tell my sons now that I have played against Steph Curry when we sit down to watch him on TV.”

Tait was loathe to single out individuals when looking back at his years at the top level, but had no hesitation in turning to those closest to him.

“For me my family has been huge for me throughout my career. My father is my biggest influence and without him I am scared to think how things might have ended up, and mum goes hand in hand in that sentiment. The mother of my children, my partner Brooke and my two sons have sacrificed the most in my 13 years, I thank them with all my heart.

“In basketball terms it would be unfair to try to name names. I have played with great coaches, players and support staff – they are huge too. Everyone I have been involved with over the past 13 years, we are all family and I am sure I will keep supporting them and staying in touch. I am thankful to everyone for the opportunity and the coaches especially.”

A fitting tribute also comes from his long time team mate Mika Vukona, with the two sharing various club teams and plenty of air miles and game time in the Tall Blacks environment.

“Amongst my favourite quotes is ‘it is not the honour you take with you but the heritage you leave behind’ and Lindsay is the perfect example of this. He honoured, was dedicated to and bled for the black singlet. 13 years of unwavering loyalty and pride in the jersey, representing his country. Lindsay’s contribution to the singlet can never and should never be undervalued and just like those that wore it before him such as Pero Cameron, Phil Jones, Paul Henare, Dillion Boucher Pete Pokai, Stan Hill, Nenad Vucinic and I could go on forever. Like them he leaves his imprint on New Zealand basketball, he has carried that torch they passed to him to create and make this sport that we love better than what he experienced when he first played. Lindsay is a great servant of this game and as friend I will truly miss what he brought. A player whom I looked up to and will always respect.”

Tait will meanwhile continue to play in the New Zealand NBL, where he is currently suiting up for the Super City Rangers.

The Tall Blacks to prepare for and play in the FIBA Olympic qualifying tournament will be named this week.

Tait made his international debut in 2003 for the Tall Blacks and was a member of the 2006 Commonwealth Games side that won the silver medal in Melbourne. In 2009, Tait was the starting point guard for the New Zealand team that defeated the Australian Boomers on their way to winning the FIBA Oceania Championship. Tait participated in the 2010 FIBA World Championship in Turkey and was a member of the first ever New Zealand side to win the Stanković Cup in 2011 in China, repeating the feat again in 2015. He went on to play for New Zealand at the 2014 FIBA Basketball World Cup and 2015 FIBA Oceania Championship.