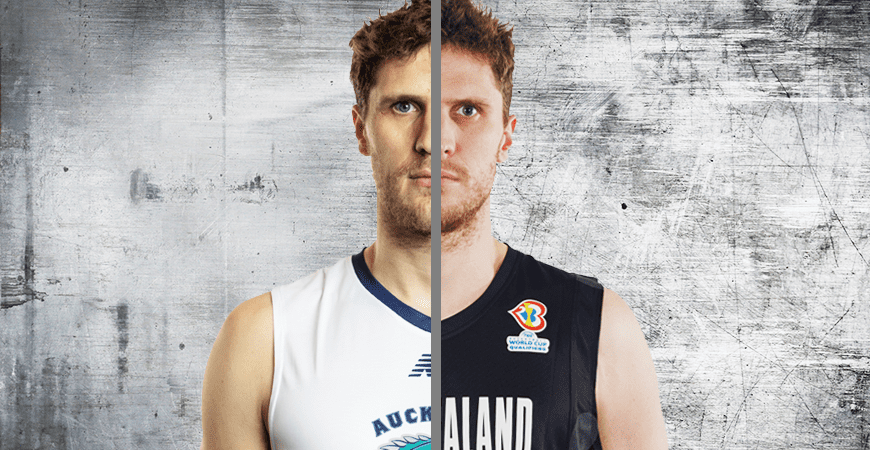 With the Sal’s NBL now a month into the 2022 season, it’s a good time to look at how our current Tall Blacks have performed over the first four rounds.

This NBL season has seen 14 current Tall Blacks suiting up in the Sal’s NBL; including 12 of the 14 athletes who attended the FIBA World Cup Asian Qualifiers in March, and all four players who featured in the 3×3 FIBA Qualifiers in Doha in March (with Taylor Britt and Tai Wynyard appearing across both squads).

GM of Leagues, Huw Beynon says that the Sal’s NBL can serve a dual purpose for the national team players.

“On one hand, it’s a platform for aspiring Tall Blacks to be seen by national selectors; Taane Samuel is a great example of this, his play with the Saints last year translated into a first ever call-up to the Tall Blacks in March,” says Beynon.

“It’s also a great way for current Tall Blacks to keep their skills sharp during the year, whether they’re coming off of ANBL seasons like Tom [Vodanovich] and Rob [Loe] or are local-based veterans such as Ethan [Rusbatch].

“And it’s great for the Sal’s NBL – having top-level kiwi athletes playing in front of home crowds in addition to their international duties. They’re what kiwi kids aspire to be when they grow up, a top-level athlete playing for their home team – and their home country – with pride.”

Let’s check out how each player has performed so far:

Teaming up with fellow big man Chris Johnson for Auckland Tuatara, over 5 games Loe is averaging 17.8 points and 12 rebounds – good for 2nd in the NBL – 4.8 assists and 1.2 blocks. He is fifth in the league in minutes played with 35.1, and has also had double-doubles in his last four games. This herculean effort has Loe currently sitting 3rd in the MVP race.

Fahrensohn is averaging a healthy 13.6 points (third-best on the team), 5.2 rebounds, 2.4 assists and 1.4 steals across 5 games this season for the 4-1 Tuatara, establishing himself as a solid third option behind MVP candidates Rob Loe and Chris Johnson. His 2 threes made per game also leads the Tuatara.

Bezzant has been a focal point for the Bulls offense so far, leading the team in points (14), rebounds (5.8) and steals (2.0) after 4 games – with those numbers also placing him first in the Sal’s NBL in assists per game and eighth in steals. Bezzant’s standout game this season came in Round 2 against the Sharks, when he registered 28 points (10-18 shooting), eight assists and four steals.

Known as a prolific scorer, Rusbatch is averaging 19.8 points in 34.6 minutes per game for the Hawks – both currently sixth-best in the NBL – and has scored in double figures in all five games this season. He is also averaging 7.6 rebounds, 1.6 steals and 2.8 made threes for the fifth-placed Hawkes Bay team. In round 2, he exploded for 30 points and 5 made threes in a 87-68 away win versus the Sharks.

Harris has been phenomenal defensively for the Hawks this season; the 6’6” forward leading his team with 12.3 rebounds (fifth-best in the NBL), 1.8 steals and 1.5 blocks in 33.1 minutes. Offensively he is averaging 12.3 points and five assists, making him the only Sal’s NBL player to average at least 10 points, 10 rebounds and 5 assists this season. Harris’ bets game came in Round 4 against the Tuatara – his 16/10/8/2/2 statline a key reason why the Hawks were able to hand the Tuatara their first loss.

A dominating inside presence for the Airs, Wynyard is averaging 19.6 points, 10.2 rebounds  and 56.5% shooting to lead the team in all three categories this season, to go along with 1.2 blocks and 1.2 steals.  He’s currently ranked second in the NBL in offensive rebounds (4.6 per game) and eighth in overall rebounding. Wynyard went off against the Sharks in Round 4, with 19 points, 13 rebounds (9 offensive!) and 2 blocks to secure the vital win. He currently sits 4th in league MVP voting.

Named Captain for the Taranaki Airs this season, Rodger is averaging 9.8 points and 2.8 rebounds and a team-leading 3.2 assists over 5 games. He’s also second on the team in three point percentage (42.1%) and threes made (1.6 per game) behind new import signing Anthony Hilliard. Rodger’s best effort came in Round 4 against the Sharks, with 12 points (3/4 from downtown) and 5 assists.

Joining the Wellington Saints in Round 4 after winning the Aussie NBL Championship with the Sydney Kings, Vodanovich filled up the statsheet in his first game back – registering 16 points, 11 rebounds (5 offensive), 2 blocks and 2 steals in 31 minutes of action. A dynamic inside/outside presence, Tommy V also hit 3 triples in the tough loss against the Rams.

As expected, Samuel has improved in his second season in the Sal’s NBL. He’s currently averaging 22.3 points per game – fourth best in the league – along with 6.7 rebounds and 2.3 made triples in 33.2 minutes per game for the Saints. Against the Rams in Round 4, the 6’7” centre registered 30 points and 7 rebounds while shooting 50% from the field.

In six games with the Rams this season, Britt has averaged 10.5 points, 3.8 rebounds and 5.5 assists – the latter third-best in the Sal’s NBL. He has scored a season-high 16 points on two separate occasions, while also recording 3 steals in a 87-75 win against the Taranaki Airs.

Cook-Green exploded for 30 points in the Rams opening round win, and has since settled in nicely for the Rams in a bench role this season – averaging 13.8 points, 3.3 rebounds and 2.3 assists in 21.6 minutes per game. Cook-Green has been particularly effective from behind the arc, shooting 40% to date; part of the reason why the Rams lead the NBL in threes made.

McCullough is enjoying his season with the Otago Nuggets so far, averaging 15.3 points – second behind MVP candidate Sam Timmins – 3.2 rebounds, and 1.7 steals per game over 27.9 minutes. He had a breakout game against the Bulls in a Round 4 win, hitting 5-10 threes as part of 29 point, 4 steal outing; outscoring the entire Bulls team 20-15 in the first quarter.

Kelman-Poto continues to be a do-everything man for the Sharks, averaging 14.2 points, a team-leading 9.2 rebounds, 4 assists and 1.4 steals in only 27.4 minutes per game. He also teams his team in both shooting (55.8%) and offensive rebounding (2.6 per game), making him a solid offensive option for Southland. Kelman-Poto’s opening game against the Saints saw him just miss out on a triple-double, with a remarkable 18/9/9 statline.

Inger has been solid for the Sharks so far – averaging 12.4 points, 5.6 rebounds and 1.6 blocks – the latter eight-best in the NBL – in a team-leading 29.7 minutes per game. Inger’s best game this season came in Round 4 versus the Taranaki Airs, filling up the stat sheet to the tune of 20 points (5-10 from downtown) five rebounds and five blocks.