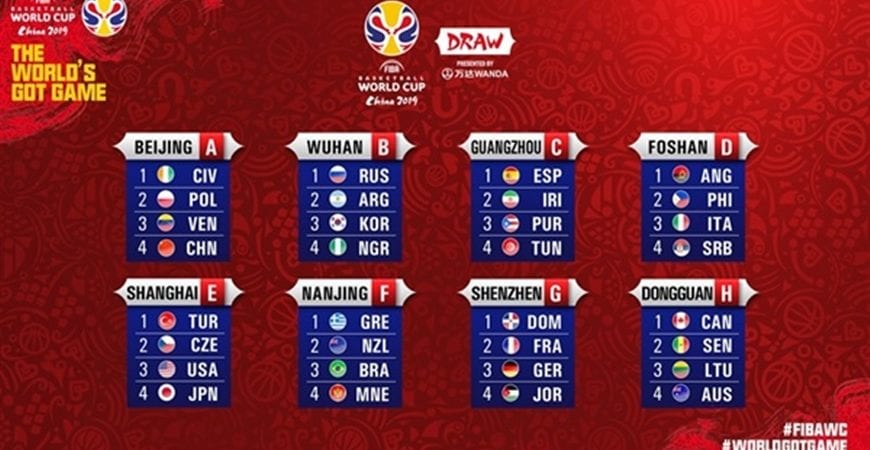 They qualified some time ago, but now the MBO Tall Blacks know the path they face at the FIBA World Cup in China in August and September this year, with the draw made in China in the early hours of this morning NZT.

The draw has placed them in Group F, against powerhouse opponents Greece (topped a super-group including Serbia and Germany in the World Cup Qualifiers), Montenegro (7 and 5 record finishing third in European Group I Qualifiers) and South American superstars Brazil (9 and 3 record in America’s Group F), with games to be hosted in the city of Nanjing.

Far from fearing the draw, Head Coach Paul Henare welcomes the challenge of a fifth consecutive World Cup for his team, and the prospect of continuing a run that has seen the Tall Blacks alongside world powers the USA, Argentina, Serbia (formerly Yugoslavia and Serbia and Montenegro) and Spain as the only teams over the past four tournaments to qualify for knock-out play.

“This is always an exciting part of the journey to a World Cup, to finally find out who we will play and begin to put our plans in place. Obviously it will be tough, it should be and will be, that is basketball. Our world ranking consistently puts us in amongst the world’s best teams, but basketball is one of the true global sports, with anyone in the top 50 or 60 capable of beating a top ten team on their day.

“Greece and Brazil will be the obvious favourites in the pool, but Montenegro is also a proud basketball nation, we will get to work on some plans on how to achieve success against them all. My job now, with the coaching and support staff, is to pull together a preparation that will give us a shot of playing to our potential, and then of course selecting the final roster. After our qualifying campaign we have plenty of players putting their hands up to be on that plane.”

Henare and assistant coach Pero Cameron were both in that famous 2002 roster that upset the odds and finished in fourth place, while fellow assistant coach Mike Fitchett experienced the tournament in 2010.

“We have a proud history of overcoming the odds. You might say we have been better in those situations, when no one expects us to do well, we love to be in the fight as an underdog. The team that we will assemble will pour their hearts and souls into continuing our proud record on the world stage and honouring Tū Kaha by representing the past, the present and the future in everything we do.”

The tournament format is cut throat, with the top two from each Group advancing to the round of 16 and a shot at the medals, while those finishing third and fourth will play in classification 17 to 32 matches.

The highest ranked team from Oceania at the World Cup will book a berth at the Tokyo 2020 Olympic Games. Australia has drawn Canada, Lithuania and Senegal in Group H.

Should New Zealand progress from Group play, they will cross over with Group E, those teams being USA, Turkey, Czech Republic and Japan.

The full draw can be found HERE.