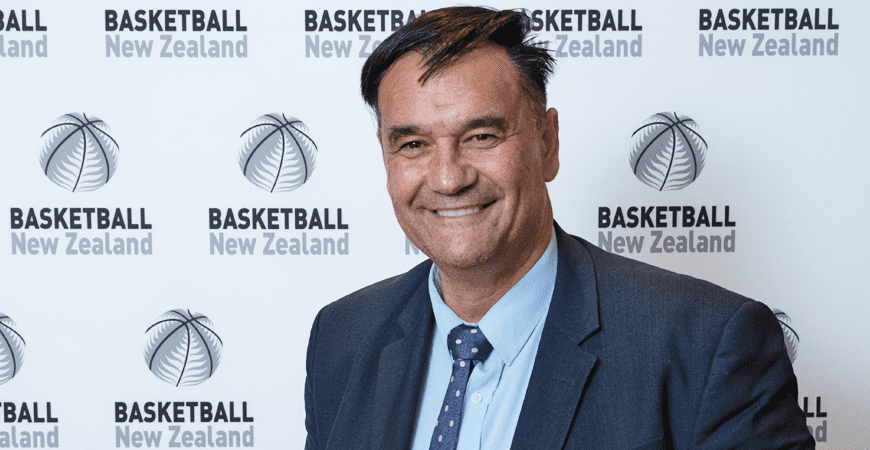 Basketball New Zealand (BBNZ) is pleased to announce that Tall Blacks great, Glen Denham will be joining the organisation as a Board Member from next month.

BBNZ Chief Executive, Dillon Boucher says that Denham brings a strong presence to the Board as a celebrated player, leader and educator.

“This is a huge step for the Board to have a person of Glen’s stature in the basketball community, someone with his incredible mana,” says Boucher.

“He’ll bring solid governance experience to the board from his time in the education sector, both educational and operational leadership and someone with a strong global perspective on current educational trends and innovative practice.

“Glen is someone who is perfectly positioned to help BBNZ continue to achieve great things for the sport of basketball – and the people who participate in it – across Aotearoa.”

Denham is well-known to basketball fans, having captained the Tall Blacks on the international stage between 1984 and 1999. His 169 national team appearances rank 5th all-time, while his 122 captaincies are 2nd all-time – behind only Pero Cameron. He currently holds the record as the longest-standing captain in Tall Blacks history.

Denham also played 13 seasons in the NBL, debuting for the Waikato Pistons in 1986 before winning championships with the Canterbury Rams in 1989 and 1990. He is perhaps best known for his time spent playing for his hometown Otago Nuggets from 1991 to 1999. In recognition of his basketball achievements, Denham was inducted into the BBNZ Hall of Fame last year, while also being named as one of the Top 10 Kiwi basketballers of all time.

Following his storied basketball career, Denham transitioned into the education sector, going on to have a successful career in both Britain and New Zealand. He was formally Executive Principal and Founding Principal of Oasis Academies’ Shirley Park Academy and Area Academy Croydon in London (2013-2015 and 2009-2015 respectively), playing a key role in these academies being named one of the five most improved schools in the UK.

Denham says that he is joining the BBNZ Board as he wants to give back to the sport that helped make him a success.

“I want to give something back to basketball in Aotearoa and I am here for the kids and the code – it’s our job as leaders to focus on this,” says Denham.

“There’s a great saying that goes ‘to give without remembering, and to receive without forgetting’ and I’ve been the recipient of that, where referees, administrators gave all they had constantly and I never forgot that – so it’s just my turn now to give back to a sport that I love and that’s been very good to me.”

“We’re the fastest growing sport amongst teenagers, so we’ve got a tiger by the tail – so for me it’s about getting out and having small conversations often with our people in the regions; we need our associations and key players to come together as one for the greater good of the game.”

Denham says that his career as both a basketball player and an educator has helped give him a balanced perspective on the sport.

“I think I’m at two ends of the spectrum really, I’m older now but I still walk with youngsters every day – those that are so keen and committed to playing basketball. Being in amongst that and listening to their needs, helps me to have a ‘finger on the pulse’ for these kids and their parents.

“Secondary school age can be a crucial time for our athletes, as the great thing about our code is it can provide a lifelong involvement in sport – whether it’s playing, refereeing, administrating or supporting – and a continuing pathway for them.

Denham says that his focus will be on people who make basketball possible in the community, as much as the athletes who play the sport.

“The greatest contributions in our game don’t happen on the court, they happen off the court – with our administrators, our referees and the volunteers who open up the gym.

“They’re the heroes of our sport and we need to look after them.”

Denham’s appointment will officially be announced at the BBNZ AGM next month.