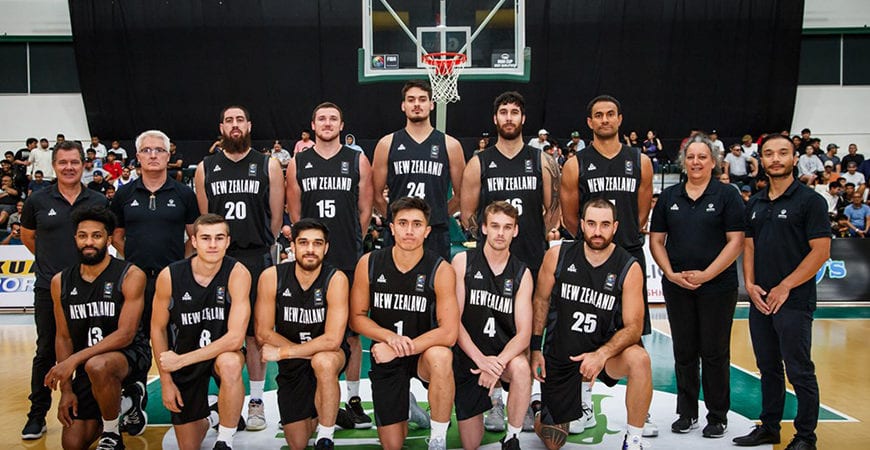 The Tall Blacks overcame a brave and passionate effort from Guam, winning their FIBA 2021 Asia Cup qualifier 113-94 in Guam tonight, confirming their position at the top of Group C following their impressive victory over Australia on Thursday night.

It was again an undermanned New Zealand side, with Jarrod Kenny, Rob Loe and Hyrum Harris not making the 21-hour trip to the Micronesian island nation, with Tyrell Harrison and Taine Murray coming into an 11-man roster, but that mattered not as the New Zealanders played with their now trademark pace and passion.

Shea Ili once again shone in the high-octane New Zealand system, leading all scorers with 25 and backing that up with 8 boards, 7 assists and 4 steals his 29 minutes, the Melbourne point guard was unstoppable, while Reuben Te Rangi again showed he must be one of the hottest properties in the ANBL off-season, with 17 points on 6 of 9 shooting, including 5 of 8 from deep.

Head Coach Pero Cameron was delighted with the maturity shown by his team, in an atmosphere that paid huge credit to the home nation.

“First of all, credit to Guam the nation and the people, they have been so welcoming and warm to us during our short stay and they showed their passion for the game and for their team tonight, with an amazing atmosphere that willed their team on tonight.

“That was a crazy window with everything going on, to come away with two wins was remarkable with this group of young men. That was a tough game, they lost Wesley to an injury early in the second quarter and that meant a couple of their guys had to step up and they did.

“We started putting it together and got out to a 25-30 point lead and took the game away from them in key moments.”

Cameron shared thoughts on his indefatigable captain Mika Vukona, who turned in a stellar performance with 10 points and 6 rebounds in 24 minutes.

“It is more than the stats; it is the hustle and efforts he keeps giving us and that is all about the team and our culture that we try to live up to. He is just phenomenal, I played with him, coached him and played against him – I hated playing against him. He is a great leader and a great athlete.”

The first half saw the expected all out assault from the home side, playing in the biggest game of their lives in Asia Cup qualifying for the first time, with Guam riding that passion and the excitement of a noisy home crowd to a 24-22 first quarter lead.

But New Zealand stayed patient, winning the second quarter 34-19 to lead by 13 at the half, with Shea Ili again leading the way, backing up from his 21 point performance against Australia in Brisbane, the Melbourne point guard had 17 points in the first 20 minutes.

Any complacency was well and truly dispatched however with Guam re-energized by the break, with Earnest Ross and Jonathan Galloway leading a 14-8 run that all but halved the lead in the opening three minutes of the half, at the same time bringing the vocal crowd back into proceedings.

Head Coach Pero Cameron called time and his players responded, with the Tall Blacks going on a seven-point run to extend back out to double figures. That composure continued throughout the rest of the quarter, with everyone playing a role in a typical Tall Blacks team performance, Dion Prewster was strong under the basket, Mika Vukona was turning the clock back with his sprints up and down the floor and young Tayler Britt was accurate in his direction at the point.

The final quarter was largely processional, with the effort telling on the legs of Guam and the accuracy of the New Zealanders just too good as they made it two from two to begin their 2021 Asia Cup qualifying campaign. The bonus for New Zealand was valuable game time for the impressive Britt, but also minutes off the bench for youngsters Tyrell Harrison and Taine Murray, players who look sure to wear the black singlet for many years into the future.