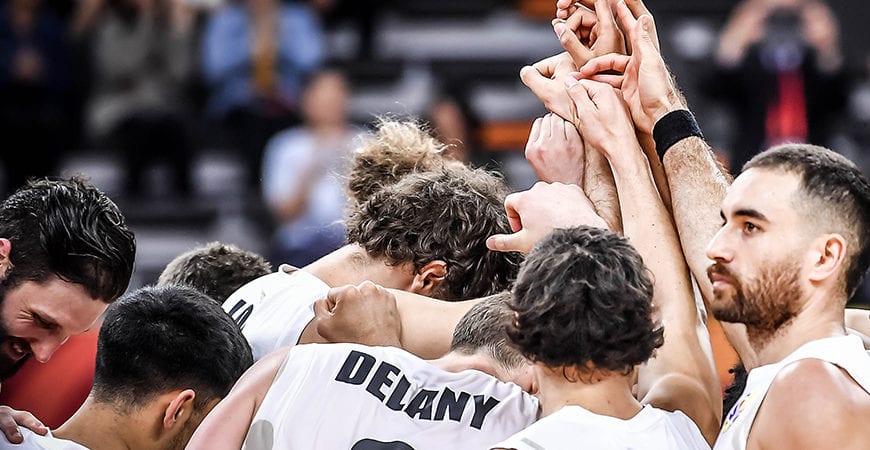 The Tall Blacks have named an extended squad of 14 players from their eligible long-list of 24. A 12-man roster will be named for the upcoming Round One Window of the FIBA Asia Cup qualifying games against Australia (Brisbane 20 February) and Guam (23 February).

It is the first roster named by incoming Head Coach Pero Cameron as the Tall Blacks begin their path to the 2021 Asian Cup, but also preparation for the Olympic Qualifying Tournament in June.

“This is a vital window for us, both in terms of the Asia Cup qualifying process, but also to get the bulk of the team together before we have a final shot at the Olympic Games at the qualifier in Serbia in June,” said Cameron.

“It is also a tricky time of the year as we look to balance the importance of these games and the opportunity to represent New Zealand with club commitments, travel and in some cases injuries. On top of that, the US based College players are essentially ruled out of contention given where they are at in their seasons and studies.

“We believe we have found that right mix and will bring together a group with considerable experience, and an understanding of the FIBA windows and the challenges they present. They understand the significance of these opportunities to pull on the black singlet.”

There are potential returns for two key players, Mika Vukona and Reuben Te Rangi (both Brisbane Bullets). Both are excited by the chance of returning to the national team set-up after they were ruled out of the tournament through injury.

The FIBA window is recognized by leagues around the world, with players released for international duty from 17 February and returning 25 February, with leagues breaking during that time to allow for games to be played around the world. The Tall Blacks will assemble in Brisbane on 17 February and prepare for the game against Australia at Nissan Stadium, the home of the Brisbane Bullets, on 20 February, before travelling to Guam to take on the Tai Wesley led side in Guam.

Cameron says it is vital that players welfare is top of mind coming into the window, as is returning them back to their clubs in great shape, but for the short duration of the window their focus is on the black singlet.

“Our support staff led by the medical team does a superb job of managing player loads in practice and in games, and they are constantly monitoring players on the long list during their club seasons. It is important that we understand the conditioning of the players as they arrive with us, carefully manage them through the window, and equally the understanding of the clubs and the sharing of information is all part of that.

“But this is one of a very few windows dictated by FIBA to enable the international game to be in the spotlight and for players to pursue their international careers. The respect shown by clubs and leagues around the world for the international programme is vital, as is the same respect back in the other direction.”

The matches are the first step in qualifying for the 2021 Asia Cup in a yet to be determined host country, the second tournament for New Zealand after their impressive first ever showing in Lebanon in 2017 when a young and largely untried roster finished fourth, launching the international careers of the likes of Shea Ili, Finn Delany, Tohi Smith-Milner and Jordan Ngatai.

Cameron is not for one moment underplaying the significance of the window and the quality of the opposition.

“Everyone knows how tough Australia will be, even with a domestic based roster, they will start warm favourites on their home floor thanks largely to the great depth they have across all positions and the chemistry those players have established over a long time playing together or against each other.

“What many might be surprised by is the quality of Guam, led by the Wesley brothers (Tai, Mikeli and Russ). They are playing confident basketball and have dominated qualifying to this point. This game at home will be a huge occasion for them and they will be primed to make an impression, we will need to be at our best in what promises to be an environment that will heavily favour the home team.”

The 24 teams in qualifying are made up of the top 16 from the 2017 Asia Cup, plus eight teams from pre-qualifying tournaments, with Guam dominating the East Region to earn their place alongside Hong Kong, Australia and New Zealand in Group C. Teams play each other home and away, with the top two teams in each Group progressing directly to the 2021 Asia Cup, while the third placed teams play at a final qualifying tournament in 2021 to find the final four teams in the 16 nation Asia Cup.

The final 12 will be named closer to the time of the team assembling in Brisbane on 17 February to prepare for games against Australia and Guam (both away games).