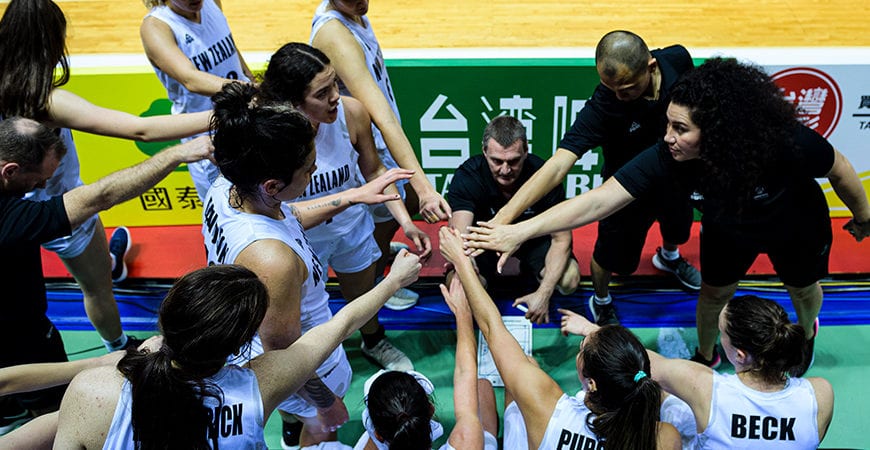 A New Zealand Tall Ferns extended squad of 24 players has been named by Head Coach Guy Molloy ahead of the FIBA Women’s Asia Cup in Bengaluru, India (24-29 September).

The squad is based around the team that mounted a successful tour of Japan and Taiwan in July where the Tall Ferns won silver at the William Jones Cup.

All 14 players that made that tour, except Zoe Richards who has collegiate commitments in the States, have been named.

Molloy is delighted with the depth and potential of his squad.

“The past 18 months, during and since the 2018 Commonwealth Games, have been really exciting in the sense that we have been able to expose a large number of players to international basketball.

“I feel we have three generations of players in the squad. We have the senior stalwarts that have served the Tall Ferns programme so well like Natalie Taylor, Micaela Cocks and Toni Farnworth.

“We then have a group in their middle twenties like Stella Beck, Penina Davidson and Kalani Purcell who will be expected to take over the mantle from the senior players at some stage.

“Then in the third group, is the exciting new talent that the system has produced that includes Charlisse Leger-Walker, Ella Fotu, Amy West and a number of others.

“It’s an exciting time as we look forward to the Asia Cup and then the Olympic Qualifiers,” Molloy added.

Seventeen-year-old Emilia Shearer is the bolter in the pack. The Year 13 student at Westlake Girls High School had a fine rookie season for the Harbour Breeze in the Women’s Basketball Championship (WBC) and has recently returned from Malaysia where she played for the national team at the FIBA U18 3×3 Asia Cup.

The other high school student in the squad is Charlisse Leger-Walker from St Peter’s School, Cambridge, the current ‘AA’ Schick Championships titleholders.

A total of 13 players that played WBC basketball in 2019 are named, including seven that played in the dramatic Division 1 Grand Final that saw the Auckland Dream overcome the Harbour Breeze.

Molloy will trim his squad to twelve players ahead of a training camp in Melbourne that precedes the Asia Cup.