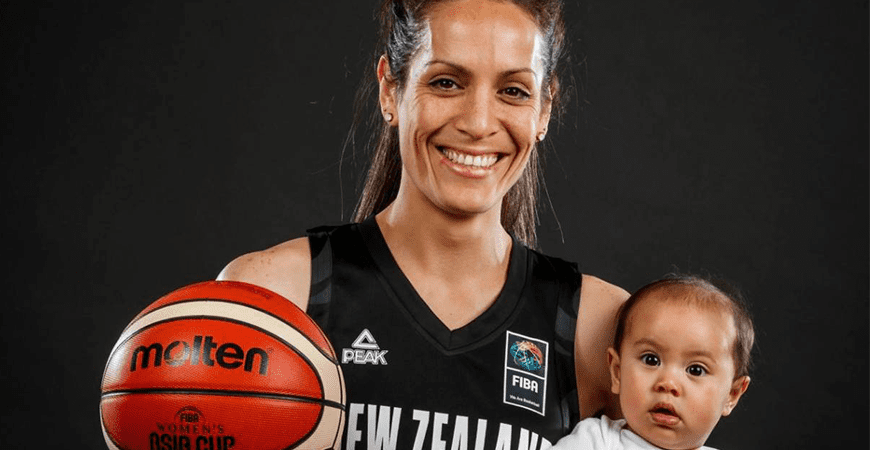 In a move that may be unique in New Zealand sport the Sky Sport Tall Ferns have taken a couple of young supporters on tour with them in addition to two extra support staff.

Basketball New Zealand have not only given full support to two of their players taking their infant children to the Asia Cup in India but have also covered the cost of carers for the children joining the tour party.

Tall Ferns Natalie Taylor and Ashleigh Karaitiana gave birth to children earlier this year and with the blessing of teammates and staff have taken their daughters on tour with them.

Kalea Karaitiana is just three months old and Charlotte (Charlie) Taylor is the veteran at the ripe old age of almost five months.

The carers for the children, Nicolette Hettig and Karli Currie, have all their expenses on tour met by Basketball New Zealand, something CEO Iain Potter is delighted to do for his players.

“We need to make room for a few important VIPs where we can. On this occasion, being a shorter tour, we could manage the cost. Those players are incredible really – being a mum and going on tour to represent New Zealand at the same time, that’s not an easy job at all! It would be easier for them to stay home, but they make it happen and we are keen to support their commitment to New Zealand.”

“We want more girls turning to basketball and aspiring to be a Tall Fern. By seeing the Tall Ferns taking on the world as they do, that only reinforces those aspirations. It’s awesome to see,” added Potter.

Long-time Tall Fern Natalie Taylor admits it is a challenge having a young baby and preparing for international duty.

“It was definitely a balancing act preparing for the tour. I try to work gym and on court training around her feeds and naps where possible and it seemed to work for the most part. Charlie sometimes becomes a weight in the gym if I end up having to hold her.

“I’ve had a lot of support with her at trainings and games from my husband Ezra, family and friends so we’ve been able to make it work.

“The tour with Charlie has been pretty smooth, she’s a good baby and the team is really supportive. My friend Karli is great with her so I’m able to focus on playing without worrying too much about her.”

Taylor believes the Tall Ferns and Basketball New Zealand are sending a positive message to all athletes not just basketball players.

“I think it is important for athletes to know they can still be a mother and play sport at a high level if that’s something they want to do. It’s not an easy road at all but it is possible. As women what we are capable of is really amazing,” said the former Olympian.

Speaking on behalf of Karaitiana and herself Taylor said, “BBNZ and Guy (Tall Ferns Head Coach Guy Molloy) have been so supportive with not only  allowing us to play at this level with an infant but also financially assisting us in bringing carers for Charlie and Kalea. Having their backing has been crucial to us getting back to the international arena this quickly.”

Karaitiana is on only her second overseas assignment with the Tall Ferns and has a lot of respect for her vastly experienced teammate.

“I definitely look up to Nat, knowing that she has done it before. Being able to train with her back in Brisbane, she has been able to help me mentally and physically be okay with being here on this tour and training and getting back into basketball again.”

“It has been a lot of fun, especially for the girls. When things don’t go our way on the court I think coming back to baby afterwards is a nice surprise. It’s been really good with the girls as they have been really helpful with the babies and wanting to hold them.”

“After giving birth I think just know that women have so much power and are able to do so many things, it definitely changed my outlook on life and basketball.

“I think with the reassurance and keeping in contact with Guy, we set goals that I needed to be back by a certain time. Being here on this tour is sort of a rehearsal run for November so I’m very grateful to him for believing in me and wanting to have me here.

“At the same time I was a bit nervous with only being on the court for maybe two months before this tour, but like I said having the confidence from the coaches and with the girls having my back it definitely makes it easier being on the court again,” reflected Karaitiana.

Tall Ferns captain Micaela Cocks summed up the feelings of the team and staff.

“I am proud that BBNZ are supporting the athletes needs and allowing the opportunity for athletes to not have to choose between motherhood and being a professional athlete.”