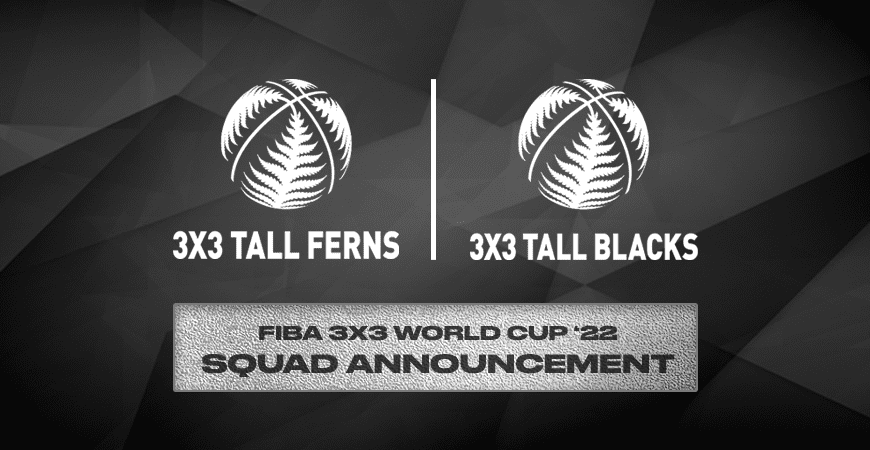 Basketball New Zealand (BBNZ) are pleased to announce its national team squads for the upcoming Crelan FIBA 3X3 World Cup 2022, to be held in Antwerp, Belgium from 21-26 June.

The 3X3 Tall Ferns squad will consist of Ella Fotu, Jillian Harmon, Kalani Purcell and Tiarna Clarke. In addition, Sharne Pupuke-Robati and Tayla Dalton have been named as reserves.

Both squads will depart New Zealand on 14 June, where they initially head to France to participate in the Big Twelve 3×3 basketball tournament – featuring many of the best 3X3 nations in the world – for the first time.

Following this tournament, the teams travel to Antwerp to compete in the Crelan FIBA 3X3 World Cup. Scheduled to tip off from 21 June over six days, the tournament will be held on the famous Groenplaats in the historic city centre of Antwerp.

The 3X3 Tall Blacks have been placed in Men’s Pool A which includes top-ranked Serbia as well as France, Puerto Rico and Brazil. The 3X3 Tall Ferns will be in Women’s Pool A alongside second-seeded France, United States, Austria and Brazil.

Each squad will play all other teams in their pool once each over Days 1-4, with the top in each pool advancing directly to the quarter-finals, while the second and third team in each pool plays a crossover playoff game to determine a quarter-final spot. The semi-finals and finals sessions will be held over Days 5 & 6, resulting in a Men’s and Women’s 3X3 World Cup champions for 2022.

3X3 Tall Blacks Head Coach, Piet Van Hasselt says that the team has a “tremendous opportunity” for the NZ 3X3 programme with the World Cup, Asia Cup and the pinnacle event – the Commonwealth Games – just around the corner.

“It’s been an honour to have the calibre of players who have participated at our competitive selection camp; these guys are not only great players, but more importantly are great New Zealanders,” says Van Hasselt.

“I know that it means a great deal to these players to represent Aotearoa and take on the world’s best. We have a special group of players across the extended squad who lead with their hearts, seek to lift up others and have that great Kiwi quality of finding a way to come together stronger in the face of any adversity we encounter as a team.

These guys are great ambassadors for the game and are hungry to succeed.”

“The calibre of players at the camp was really high and we had a few players that really surprised us – we’ve settled on a team with a mix of 3X3, life and general basketball experience, so I’m looking forward to working with these players” says Reed.

“Our focus now is to get our combinations right, as we know we’re not going to get much time together before the World Cup. Our expectations are definitely to get into that quarter-final and beyond, and this tournament also serves as a building block for our main focus – which is the Commonwealth Games.”

Reed says the Big Twelve 3×3 basketball tournament in France will help to build team chemistry in advance of the FIBA 3X3 World Cup.

“We’ve got Jillian [Harmon] already based in France and Kalani [Purcell] in Australia, Tiarna and Ella have played together a little bit, so they’ll be used to each other.

“But in 3X3 it’s vital everyone is one the same page, so the Big Twelve is a great opportunity for us to go against some of the best countries in the world – including a few we’ll meet in the World Cup – so we can get used to playing together and meshing as a team.”