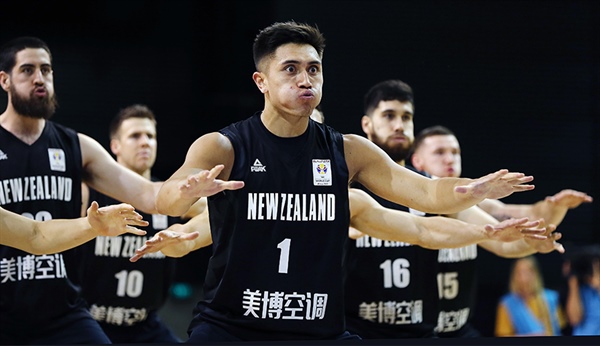 The Tall Blacks have again been tested before taking to the court at this week’s selection camp ahead of their 2019 FIBA World Cup campaign, with news that guard Reuben Te Rangi has been ruled out of the tournament with a knee injury.

Te Rangi suffered some swelling to his left knee following the recent Sal’s NBL final victory for his Saints over the Southland Sharks and further tests have revealed cartilage damage that requires immediate surgery and a six-week layoff.

Head Coach Paul Henare is ruing a week of bad news hot on the heels of Mika Vukona also being ruled out of contention for the tournament that starts in China on 31 August.

“This is the second phone call of this nature this week and it is two phone calls too many. Reuben is devastated and will take some time to come to terms with missing out on what would have been his first World Cup. What he thought initially was nothing serious has turned into the need for surgery, which he will have immediately in Brisbane.

“We have lost another one of our leaders, on and off the floor. Reuben’s development over the past few years has been immense and his role in this group was without question. His greatest strength has been his versatility and ability to contribute at both ends of the floor, we are going to miss his presence for sure in China.

“But we will look to our depth in the group to cover his absence and this presents an opportunity for someone else to step up and take on that responsibility. While you never wish these situations on any player, this is the scenario we have been preparing for in a way, with so many players exposed to international basketball over the past couple of years.”

Te Rangi was still in shock at the news, with the diagnosis only received on Tuesday, leading to a tough call to his coach.

“I am still a bit lost for words to be honest, I did not see this coming and with it being so close to flying into the camp, it is even harder to take. But the scans have revealed some loose material behind the kneecap, it must have happened during the New Zealand final, and surgery is the only option – I can’t play through this one.

“This team and singlet means so much to me and after all the hard work over two years in qualifying, it is a really tough thing to come to terms with. I will be right behind the boys and I know they will give their all in China, but right now I am not going to lie, this hurts.

“Whenever the team pulls on the black singlet I want to be a part of it and can’t wait for next year to be back with the boys at the first opportunity.”

Te Rangi will undergo surgery this week in Brisbane and rehab for six weeks to be fully fit for the upcoming NBL campaign with the Brisbane Bullets.