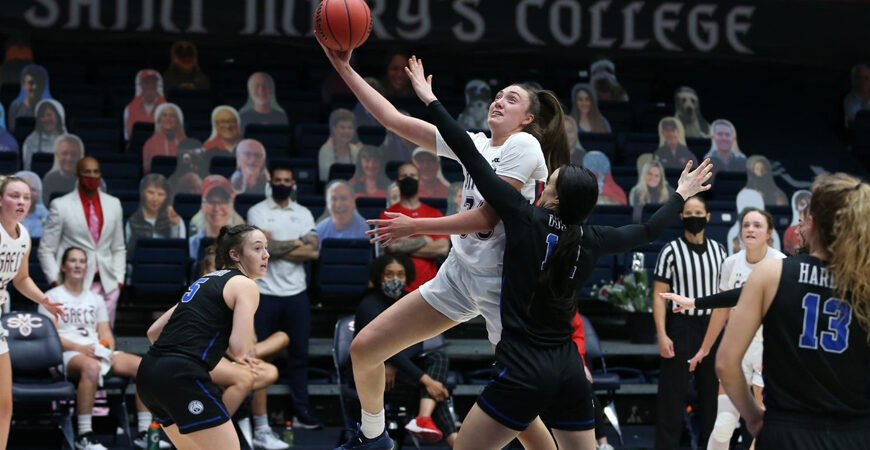 Amy West’s rise from teenage basketball novice to the New Zealand national team – and a basketball scholarship in the States – hasn’t been without a few setbacks.

One of those setbacks came in the 2020-21 American collegiate season, one which the Manawatu native and New Zealand Tall Ferns player wants to put firmly behind her. Not only was the season delayed by Covid, with games played in empty stadiums, but the St Mary’s Gaels forward picked up an untimely injury which restricted her to just nine appearances.

Amy had started the campaign well, scoring 29 points in her first three games before a shoulder injury side-lined her for almost three months. She returned to play the final six games of the Gaels season – including an outing against Loyola Marymount where she tallied 12 points, 7 rebounds and 3 blocks – but the season ended with a defeat at the hands of San Francisco (69-63) in the West Coast Conference Tournament Quarterfinals.

That loss meant that Amy had played just nine games in two years due to having to sit out the 2019-20 season, as per NCAA rules after transferring into St Mary’s for her sophomore year. It was at that point that Amy made the tough decision – to remain in the States for the off-season rather than return back to New Zealand.

“It was a really hard decision for me, because I obviously miss my family and friends so much and I also missed out on the BBNZ Tall Ferns Camp,” says West.

“However it was the right decision for me to stay in the US for my strength and conditioning and also for my basketball development; and I felt like quarantine would have set me back a lot in those aspects. It was a tough decision but I can’t wait until I can finally get home.”

Approaching the start of the coming season, St Mary’s will open their campaign on 20 November against the University of Nevada, Amy is fully fit and itching to get back on court.

“I’m in a really good place with my shoulder injury right now, I’ve built up a lot of strength to put me in the best position to keep healthy.”

Another factor in Amy’s decision to stay in Moraga, California in the American summer – rather than return to the Manawatu – was her affinity with her team and the university.

“Choosing to attend Saint Mary’s was honestly one of the easiest and best decisions I’ve ever made; I was at Liberty University for my freshman year and even though that school wasn’t right for me, that experience showed me what I really wanted for myself personally and basketball wise.

“Also I loved that the university had such a great connection with New Zealand and Australian basketball, and with Stella (Beck) previously playing at Saint Mary’s, it already felt like home.”

Fellow Tall Fern Stella Beck (2014-18) enjoyed an outstanding Gaels career – scoring 1,349 points in 123 games. Her 338 assists still sits fifth all-time in the St Mary’s record books. The kiwi connection extends beyond Stella and Amy too, with Tayla Dalton and Jade Kirisome on the current women’s roster and Dan Fotu and Quinn Clinton on the men’s roster.

Amy is hoping to have a strong season and to keep her name in front of the Tall Ferns selectors. She still has vivid memories of her appearances for the Sky Sport Tall Ferns, with her debut against the Philippines ranking as her career highlight to date.

“It was such an indescribable feeling and it was my proudest basketball moment by far; hopefully with my upcoming season at St Mary’s there’ll be plenty more career highlights.”

“She was very quick to pick up how we wanted to play and found an effective role; to find a player around the 6’4” mark but able to play with the athleticism of a smaller player, it was worthwhile getting her into the programme early – I think there’s something to work with and mould because of her energy levels and defensive ability,” says Molloy.

Amy is hoping that further opportunities to represent New Zealand will come in the future.

“It’s such an honour to represent New Zealand and it’s even better when you get to do it with people that you love. Participating in camps and traveling have definitely been challenging at times but it is always so much fun. I can’t wait till I can get involved again – hopefully soon,” added West.

Amy is a late bloomer, not playing basketball until she was a 15-year old at Palmerston North Girls High School. Amy credits current Junior Tall Blacks Head Coach Miles Pearce with being one of the biggest influences on her career so far.

“I remember back in high school when he encouraged me to switch from playing hockey and try basketball instead, and ever since that moment he’s been one of my biggest believers and supporters.”

“I was asked to go and help at a sports open day at Palmerston North Girls High School. Two girls walked in together and they caught my eye as they were the tallest people in the gym!

“It turned out to be Amy and her friend Bex; so I began the task of convincing them to play on the Junior team that year. Amy was a little reluctant at first but as the season went along she found her feet – hockey soon fell by the wayside and basketball took over.”

Coach Pearce says that Amy is determined, strong and one of the hardest-working people he knows.

“Compared to others at her level, she didn’t pick up a ball until late – yet from Year 11 to 13 she went from not playing to earning a D1 scholarship. That doesn’t come about just because you would like it to, Amy made that happen.”

“It’s great to be a part of her journey and we are proud to see her success, from her time here at home to her Tall Ferns debut and her success in the US – we can’t wait to see what her future holds.”

With the American collegiate pathway seed planted in her mind, Amy began working towards the goal of obtaining a basketball scholarship.

“As soon as I knew it was a possibility I had my mind set on it, pretty much as soon as I started playing. I had a lot of catching up to do since I started playing at an older age, but I did everything I could to give myself the best chance of making that dream happen.”

Now living the dream, and with her career trajectory heading north, right now the focus for West is very much on her Kinesiology studies and a shot at the West Coast Conference title – which the St Mary’s Gaels haven’t won since 2001.

The 2021-22 season has begun promisingly for Amy and the Gaels. The team have won two of their opening three games with Amy starting on each occasion.

She has averaged 3 points and 4 rebounds in 17 minutes action per game, as she continues to find her game legs again after a long off-season.