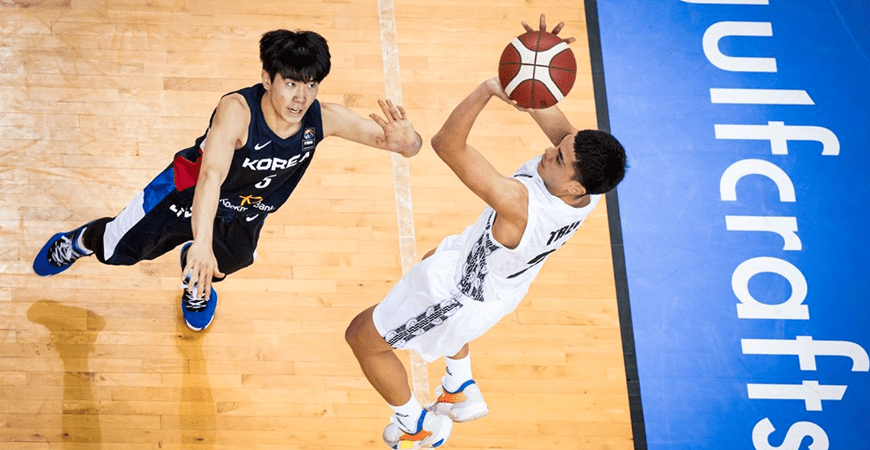 The New Zealand U17 Men’s National Team were defeated 79-73 in overtime by Korea in its second game at the FIBA Asia Cup in Doha, Qatar on Tuesday.

The scores were tied at 66 points apiece in normal time, Korea winning the additional five minutes 13-7 to move directly into Friday’s quarter-finals.

The defeat means New Zealand will play Kuwait on Thursday in a preliminary play-off. The winner of that game also advancing to the quarter-finals.

New Zealand led by 12 points soon after half-time but found points hard to come by at the back end of the game. They will rue lost opportunities at the foul line, missing 14 of 31 attempts.

Book, as he had done in the opening fixture against Kazakhstan, scored the opening basket of the game, however it was Korea with an 18-15 lead by quarter time.

Will Short, debuting after missing the previous game through injury, came up with the first two scores of the second period for the Kiwis.

The Kiwis finished the half with an 8-2 run to lead 36-29 at the interval but New Zealand head coach Darron Larsen would have had two major concerns at the break.

Poor free-throws shooting saw his team make just 6 from 15 (40%) and 12 turnovers were given up meaning Korea had 10 more shots in the half than New Zealand. On the plus side the Kiwis were leading the rebounding count 31-14 with Halaifonua having almost as many as the whole of the Korean team – he had 12.

A tense, low scoring final period ensued. Despite denying Korea a field goal for the first four and a half minutes of the final frame the Kiwis were struggling to break the game open leading by just three points 61-58.

George Turner made a timely three (64-60) but Korea were not finished, tying the game with two minutes to play.

Book made two go-ahead free-throws with 90 seconds to play, however Korea were able to tie the game with 10 seconds remaining. Both teams had a possession to win the game in regulation but neither accepted the opportunity.

The 13-team Tournament, postponed from 2021 due to Covid, doubles as a Qualifying Tournament for the U17 Men’s FIBA World Cup to be played in Spain in July – the top four teams in Doha will qualify for the Word Cup.

The U16 Asia Cup fixture schedule can be found on the link below. Live streaming will also be available on this link: