Waikato do the double at Aon Under 17 National Championships 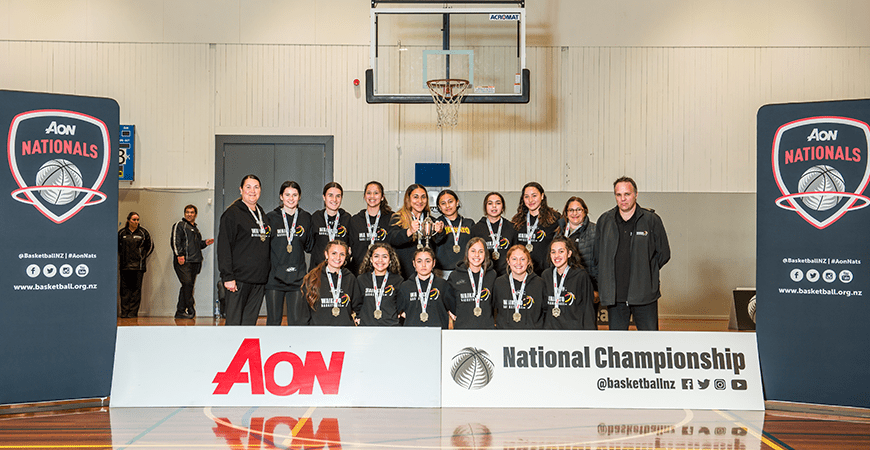 The 2020 Aon Under 17 National Champions were crowned at Cowles Stadium this evening, with Waikato taking the glory in contrasting finals.

The girls defended their title in a low-scoring bout with Hutt Valley, beating the Wellington-based team 49-34 in a game marred by less than desirable shooting and excessive turnovers.

Nerves were evident for both sides from the tip, but Waikato’s talent and experience on the big stage gave them the slight edge in the opening stages.

New Zealand representatives Alana Paewai and Breeje Schuler converted two of their shooting attempts, while tournament MVP Jayzelee Waihi also chimed in to give their team a 15-4 first quarter lead.

Hutt Valley got themselves back in the contest by way of scores near the rim from Jyordanna Davey, only her efforts were matched by those in red singlets.

The previously mentioned trio added to their totals to keep the advantage in double-digits after 20 minutes, but Head Coach Anthony Corban can’t have been happy with his team shooting 26% from the field. Thankfully for them, Hutt Valley shot 18%.

The inefficiency on offence didn’t change after the break, as both teams made up for their woes near the opposition’s hoop by defending their own with vigour. The finalists combined for 19 points in the third, Waikato responsible for 10 of them.

Hutt Valley started the last quarter on the right foot with a three from Gina Manila, followed by a lay-up off a sweet pass from Tia-Calais Remuera. Schuler regathered her own miss and finished in close and got to the free throw line to push the buffer back out, before fatigue got the better of both of teams.

Valiant was the effort from the north island association, but Waikato hung on to until the expiration of time to store the trophy away for another year.

Dissimilarly to the champions before them, the boys were behind the eight ball early but recouped for a 91-86 win over Waitaha-Canterbury.

The hosts shot out to a seven nothing lead within the first minute, sending the local support into a frenzy. MVP Kazlo Evans would quiet the crowd with an and-one on the ensuing possession before Kenechukwu Nwafor got involved with four straight scores.

The forward ended the period with 14 points and six rebounds, and muscled his outfit back in front with free throws at the start of the second quarter. The scenes that followed would be the story for the remainder of the game – an arm wrestle.

For every Hunter Adam or Josh Book basket, Waikato’s big three of Nwafor, Evans and Akiva McBirney-Griffin answered. However, it was a member of the eventual winner’s bench who had the last laugh in the half, as Junior De Young splashed home a trey to give his team a 50-46 advantage at the main interval.

Nothing changed up in the third until Book rolled down hill to draw the bucket, foul and lead midway through the spell. Just as they’d done previously though, the out-of-towners spoiled the fun with consecutive scores.

Adam’s block on an Ezra Smiler lob attempt got the crowd back on their feet, but his side’s failure to convert easy looks would suck the air right back out of Cowles and prove costly.

Waikato clung to a two-possession at the early stages of the final quarter and looked to be coming undone as Nwafor picked up his fourth foul and Evans fouled out with a handful of minutes to play.

Canterbury were given multiple opportunities to tie or reduce the trailing margin at the charity stripe but just like their gimmes in the third, they went amiss.

It was a one-possession game with less than 60 seconds on the clock after Book went the length of the court for two, only McBirney-Griffin replied, and Waikato finished on top.