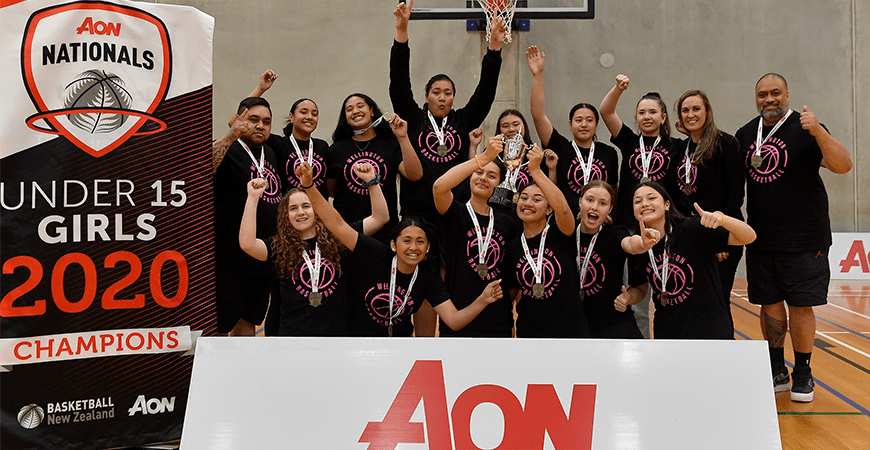 The Aon Under 15 National Championships concluded on Monday evening at Hamilton Boys High School with Waikato claiming the Boy’s title with a 76-68 victory over Auckland and Wellington taking out the Girl’s title with a 68-60 win against Waikato.

The Girls Grand Final was a repeat of 2019 championship game that also featured Waikato and Wellington. It also pitched two former Tall Ferns Olympians Tania Tupu and Leanne Walker against each other.

Tupu would have been the happier of the two at the first break as Wellington scored the last six points of the opening frame to lead 14-11.

Holly Morgan and Tatiana Mareko extended the Wellington advantage to 15 points before Kaelani Albert-Neha and Caitlyn Ward struck back for the hosts – Wellington ahead 28-21 at half-time.

Tannika Leger-Walker and Lilly Taulelei exchanged points early in the second half as both teams enjoyed mini scoring runs.

The influential Taulelei (17 points) picked up a fourth foul at the midpoint of the third quarter but Krystana Leota did a sterling job coming off the bench and her three, late in the period, carried Wellington to a 43-36 with ten minutes to play.

Elise Gilbert (14 points) and Ward narrowed the Wellington lead to three points (50-47) with six minutes to play and Tupu needed a timeout.

When Leger-Walker, who scored a game high 20 points, and Gilbert scored in quick succession Waikato trailed by just two points with three-minutes to play.

Ripeka Edwards cancelled out a Morgan score and the deficit was just a point –  cheered on by the home support the defending champions looked to have seized the initiative inside the last two minutes.

However Wellington held their nerve – Taulelei, the Tournament MVP scored inside, Lane Gough scored off an important offensive rebound as they stretched out to a 65-58 lead.

Waikato desperately forced the pace but couldn’t come up with baskets leaving Rangituturu Tawera and Naomi Sopoaga to ice the game for Wellington who avenged last year’s grand-final loss in style.

The Girls’s Bronze Medal game went to overtime with Otago defeating Rotorua 77-70 after the scores were locked at 60 points apiece in regulation. The tireless Laura Ring (19 points) paced the Otago effort but it wasn’t until Danni Thomson nailed a triple with two-minutes to play in the extra period that the teams could be separated. Alyssa Webster was excellent for Rotorua with a team high 17 points.

Earlier in the day the Girl’s Semi-Finals tipped off at 8.00am and Otago were caught napping as Waikato raced to a 39-13 half-time. Otago performed much better in the second half before going down 62-39.

The other semi-final was equally decisive with Wellington defeating Rotorua 64-41.

In a game of fluctuating fortunes Waikato were forced to survive some anxious moments before closing out a deserved 76-68 win against Auckland in the Boy’s Final.

Waikato made the better start, fell behind in the second quarter, stormed back in the third period and led throughout the fourth without being able to fully shake off resolute opponents.

Waikato made the better start as John Anderson knocked down a couple of perimeter shots to forge a 10-3 lead, however Auckland responded to close within three-points at quarter time to trail 17-14.

Auckland carried that momentum into the start of the second period through Keller Young and Josh Howes to push an advantage out to 31-19 with a 17-2 run.

Desmond Niko Faalupega answered in transition and when Tournament MVP Kashius Farmer scored from his own steal Waikato had reduced the deficit to six points at the interval (36-30).

Within 90 seconds of the restart Waikato were ahead as they raced out the blocks at the start of the second half.

Harlan Roundon, Anderson and Farmer (13 points in the quarter) were bossing proceedings and although Harri Coker-Grey landed a triple for Auckland their 11 turnovers in the period hurt their progress and they trailed 55-46 at three-quarter time.

Auckland began the final period with intent, centre Kalid Petzer setting the tone with a couple of monster blocks. When he scored inside and Dante Tapula’aia converted with an acrobatic play Auckland trailed by just three points with five minutes remaining.

Caelys Putoko and Faalupega eased the nerves of the hometown supporters and although Josh Howes and Petzer made baskets Auckland were unable to get any closer as Waikato progressed to back-to-back titles.

In the 3rd/4th play-off game Waitakere West defeated Counties Manukau 85-77. Waitakere trailed 69-68 midway through the fourth quarter but had the better of the closing stages to close out a hard fought victory against their local rivals.

Earlier in the day Waikato were comfortable winners (93-58) over Counties Manukau in the first semi-final with Auckland defeating neighbours Waitakere West 79-64 in the other semi-final.