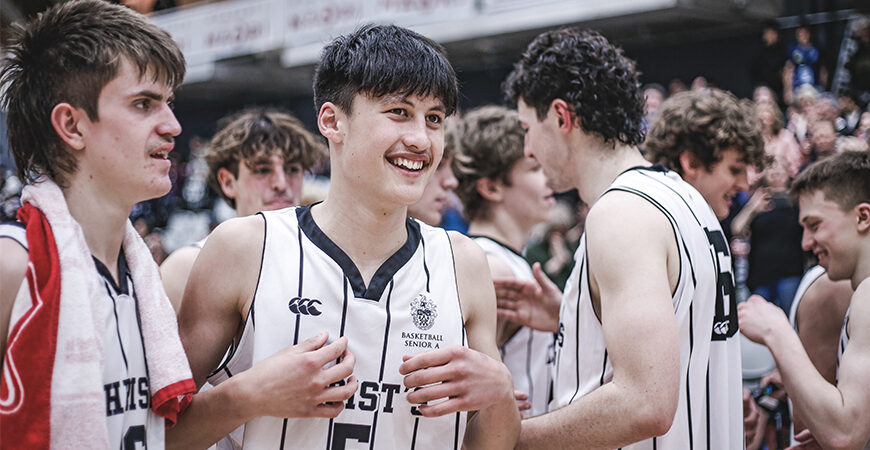 The championship wins produced the very first ‘AA’ titles for both schools.

For St Andrews (StAC) Karereatua Williams was excellent with a double-double of 18 points and 10 rebounds while Maddie Morrow (10 points) and Kavanah Lene (11 points and 11 rebounds) were also outstanding.

Both teams were bidding to win their first ever AA title and it was Westlake that made the better start forging an 11-2 lead – 5 early points for Izzy Pugh.

Jaelah Clayton and Morrow nailed the first threes for their respective teams – Lake ahead 20-7 six minutes into the contest.

Rafferty Powell made a much needed score for StAC although Pateman’s like triple meant Westlake were 31-14 ahead at the quarter-time mark.

Angelique Doig helped StAC make a positive start to pulling back the deficit, their run 10-0 when Williams knocked down her first three.

Pugh was the next player in double figures after an inside make, although late scores from Charlotte Seddon and Lene meant the Lake lead was trimmed to 11 points at half-time (49-38).

Pugh led all scorers at the break with 16 points, to go with 9 rebounds, while Williams had 10 points for StAC.

Pugh added to her tally with the opening 5 points of the second half, Williams with 6 straight in reply.

The margin was still 11 points four minutes into the third but that changed quickly – a Chatfield layup taking the lead to 18 (66-46) in the next 2:30.

Westlake were continuing to up the defensive ante with Holly Williams to the fore – the lead the biggest of the game at three-quarter time (76-51).

StAC needed a good start to the quarter and got it through Lene but Westlake had all the answers, putting together a commanding performance to deservedly claim the C.A.Clarke and Stone Trophy.

It was a terrific team effort epitomised by the performance of Liam Jack who didn’t score a point but pulled down a team high 14 rebounds.

For Rosmini Julius Halaifonua was in double-double territory with 15 points and 17 rebounds while Tom Beattie scored 11 points and Charlie Dalton 9 points.

First time finalists Christ’s College made the better start with an early 9-6 lead before Halaifonua demonstrated a couple of smooth inside moves.

Jordan Braithwaite moved Christ’s back into the lead, an Adam block, spinning drive and triple helping their cause.

The Christ’s forward had 9 points with his team ahead 22-12 at quarter time.

Tom Harrison made the first two scores of the second period before Halaifonua made an And-1 play.

Another three from Adam took Christ’s out to a 31-15 lead and Rosmini needed a timeout.

Halaifonua was proving to be Rosmini’s Go-To man, Josh Batty provided a spark off the bench but with Adam (16 points) and Harrison (17 points) in double figures the Christ’s lead was out to 20-points (40-20) at half time. Christ’s shooting at 44% compared with Rosmini’s 24% told much about the story of the opening half.

The dynamic duo of Adam and Harrison combined for Christ’s first 11 points on the resumption before Braithwaite made a pair of baskets.

Again Halaifonua was offering Rosmini a lifeline but it was slender with Rosmini trailing 57-30 midway through the third.

Beattie and Lucas Schnuriger made scores for Rosmini but it did little to dent the Christ’s dominance – the Cantabrians ahead 65-38 with ten minutes to play.

Rosmini plugged away in the fourth but the Christ’s dominance continued. Harrison took his tally close to 40, Jack his rebounds into double figures, Adam close double-double territory and Head Coach Ben Sheat, in charge of the team for the final time could afford a smile (or two)!

Thanks to our broadcast partners Whakaata Māori for the live coverage and delivery of 24 games over the six day tournament. A big thanks also to lead commentator Andrew Horrocks and his team of expert analysts Stacey Lambert, Ryan Dubbeldam, Josh Thompson, Sam Watkins, Miles Pearce, and Liam Collins.

It was tremendous to see current Tauihi and NBL players finding time to give back to the game at these championships. The following players were part of the coaching teams at the schools bracketed:

Tessa was Tournament MVP when leading Christchurch Girls HS to the championship in 2013 and Joe was a starter on the Otago Boys High School team that won the 2014 championship and was named to the Tournament Team that year.

Good luck to Olivia who heads away with the Tall Ferns to Australia next week.

The C.A. Clarke and Stone Trophy is presented annually to the Secondary Schools Girls’ Champions and was first awarded to Waimea College in 1969, played in Rotorua. The final was played between the South Island winners Waimea College and Western Heights College; final score 31-26. The result was documented in the minutes of a N.Z. Women’s Indoor Basketball Association Inc executive meeting, held on Monday, 1 September 1969.

The trophy is steeped in tradition as the donors (C.A. Clarke and Stone Ltd) were at the time producing aerated water and cordial, and had been doing so since 1883. It is believed that it was the only cordial factory in the world operating on geothermal steam. The factory was on Tutanekai Street in Rotorua, now the site of the Novotel Hotel.

The Doug Harford Memorial Trophy is presented in memory of former New Zealand player Doug Harford who was tragically killed in a car accident in 1967. Harford was in his prime at the time of his passing having represented New Zealand the previous year.

Harford represented Nelson and the South Island until 1962 when he moved to Wellington and went on to represent Wellington and the North Island teams. He was a recipient of the Keith Carr Trophy for Outstanding Guard at the 1962 Senior National Championships and debuted for New Zealand the following year. The trophy was purchased from funds kindly donated by the Harford family.