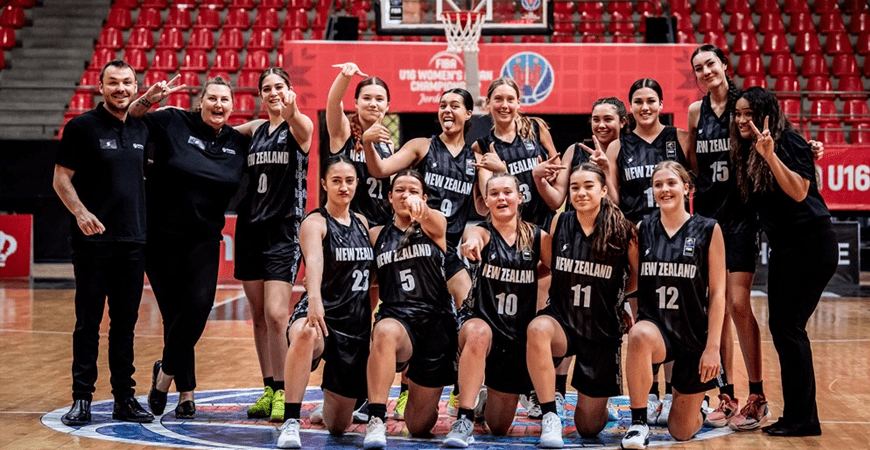 The New Zealand U17 Women’s National team can celebrate after defeating India 94-45 at the FIBA Asian Championship, in Amman, Jordan on Tuesday.

The victory not only cemented a championship semi-final spot for the Kiwis but also confirmed their berth at the FIBA U17 Women’s World Cup to be played in Hungary next month.

Coming into the game Maia Jones had made an impressive 50% (10/20) of her 3-point shots at the tournament. She added another four in this contest, at a more than satisfactory 40% , on her way to a game high 15 points. Also in double figures were Ivy Brown (12 points and 5 assists) and Ashlyn Rean. The Cantabrian produced an efficient stats line of 14 points (5/5FG, 4/5FT), 4 rebounds, 4 assists and 5 steals.

New Zealand made a sluggish start dropping behind 7-4 before Jones’ opening triple gave them their first lead of the game. Striving for offensive fluency, a low scoring opening period ended with the Kiwis 17-9 ahead.

The Double-T forward duo of Tamilo and Taulelei made the opening scores of the second period, New Zealand reeling off a 9-point unanswered run to take control of proceedings.

Amy-Lee Pateman made 6 points in the quarter – with the Kiwis obtaining scoring contributions from seven players, in the period, they entered the half-time break with a 40-19 advantage.

New Zealand began the second half with more intensity than they had in the first and reaped the benefits creating turnovers, transition baskets and a lead that ballooned beyond thirty points; 67-32 at the three-quarter mark.

As New Zealand completed formalities in the fourth quarter Brown and Cassidy Lacey-Rameka knocked down threes, Rean joined Brown and Jones in double figures while all twelve Kiwis made scoring contributions.

New Zealand will now face a re-match with Japan in the Asian Championship semi-finals on Wednesday.

New Zealand Schedule: (times given are local in New Zealand).

The Asian Championship, postponed from 2021 due to Covid, doubles as a Qualifying Tournament for the U17 Women’s FIBA World Cup to be played in Hungary, July 9-17. The top four teams in Jordan will qualify for the Word Cup.

All games are shown live via https://nz.basketball/tv/

Links to the streaming, rosters, statistics and live stats can be found here: https://www.fiba.basketball/asia/u16women/2022

Unable to travel due to injury