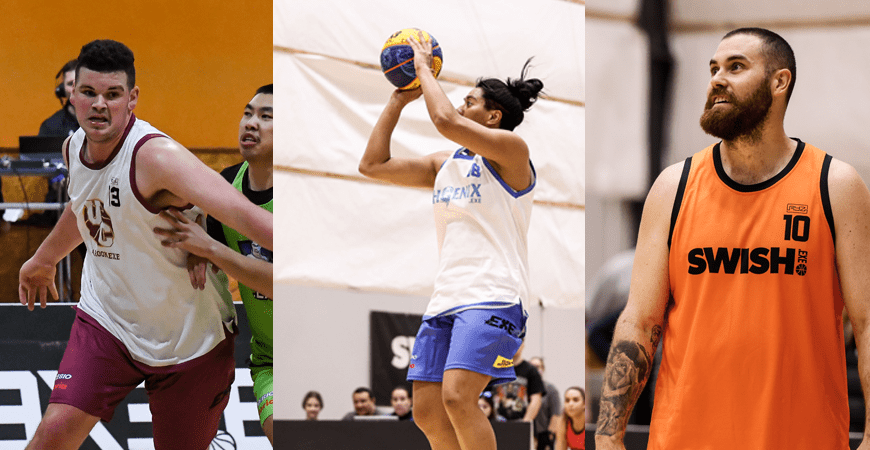 The first round of the 3X3.EXE Premier is in the books, with action played out across Auckland and Christchurch across the weekend – including the launch of 3X3.EXE’s first ever Women’s Competition.

Six women’s teams battled it out on Sat 21 May at Auckland’s Swish Factory, with Phoenix.EXE coming out on top and securing maximum 3X3.EXE Premier points.

After dispatching Wizards.EXE 18-12 in the semis, they faced off against Swish.EXE in the finals, led by fellow Whai player – and 3X3 Tall Fern – Tiarna Clarke as well as Katelin Noyer and Stevee-Rose Theyers.

Phoenix.EXE were out to pull out the 21-16 win, with Heremaia earning MVP honours and the team top of the table with 100 3X3.EXE Premier points.

The Men’s Northern competition also took to the court on Saturday at The Swish Factory, with a new team – Stingrays.EXE – added to the mix for the first time.

It was the Swish.EXE squad, comprising of veteran Karl Noyer and Tall Blacks legend Kirk Penney, alongside Zach Easthope and Ben Fraser, who took the trophy in round 1.

After beating Stingrays.EXE 21-15 in the semis, they squared off against Coasties.EXE – led by Tuatara player and 3X3 Quest Tour champ Chris McIntosh – in the finals; Swish.EXE earning a 21-17 win and maximum points in the process.

Sunday 22 May saw the Southern Men’s Competition in action for the first time this season, with six teams in action at Middleton Grange School in Christchurch.

Despite losing their second pool game (a 21-17 loss to Gators.EXE), UCMaroon.EXE were able to reach the semi-finals – where they battled out a tough 21-19 win against Wharenui.EXE. That earned Aidan Tonge, Nash Biggs, Junior James De Young and Christopher Tupaea a ticket to the finals, where the faced off again against a Gators.EXE team made up of Amosa Faitaua, Jozef Knottenbelt, Matt Mischewski and Joshua Nickel.

In a hard-fought game, UCMaroon claimed a 21-18 victory over Gator.EXE to secure maximum points.