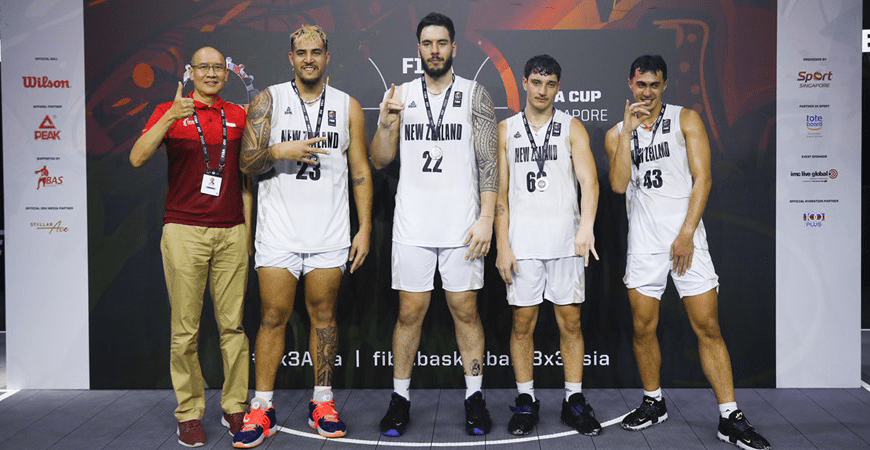 The 3×3 Tall Blacks have walked away with a silver medal at the FIBA 3×3 Asia Cup this morning, after falling 17-21 to rivals Australia in a thrilling final at Singapore’s Marina Bay Sands.

The 3×3 Tall Blacks were led by Dom Kelman-Poto with 7 points on 6-7 shooting, while Jayden Bezzant had 5, Nikau McCullough 4 and Zach Easthope 1. But the Kiwis were unable to overcome strong shooting by the Aussies who went a staggering 5-6 from outside the arc; Andrew Steel and Daniel Johnson with 8 points apiece.

This is the second time that New Zealand has medalled in the five year-history of the Asia Cup; New Zealand also finishing in second place back in 2017.

McCullough, who finished as the 7th top scorer in the competition with 29 points over 5 games (5.8ppg), was named on the Team of the Tournament. He joined Australian MVP – and Asia Cup leading scorer – Jesse Wagstaff and China’s Jiaren Zhao.

3×3 Tall Blacks head coach, Piet van Hasselt, says that the players are a ‘special group’ and he is grateful for the chance to coach them.

“We bettered two strong nations from Japan and the Philippines yesterday and had an improved showing against Australia in the final; these guys gave everything they had,” says van Hasselt.

“I’m so proud of the men’s dedication to improve every day and they are a pleasure to coach – they’ve embraced the vibe of 3×3 and their togetherness and Manaakitanga has guided us to our accelerated Ako and included pleasing results along the way.”

Both the 3×3 Tall Blacks and 3×3 Tall Ferns will now set their sights on the pinnacle 3×3 basketball event of the year; the Commonwealth Games in Birmingham from 28 July – 8 August. That squad will include McCullough, Bezzant and Kelman-Poto, alongside their FIBA 3×3 World Cup teammate in Tai Wynyard.

Van Hasselt believes that this event has set the squad up well for this event.

“The Commonwealth Games is a huge opportunity for us, and this team is focussed on representing their Whanau and New Zealand with pride.

“We’ve drawn the attention of the 3×3 powers and shown that Kiwis are well-suited for this game. I admire this team for showing their personalities in such a pressure cooker environment, which allows them to rise to the occasion and play for each other.”