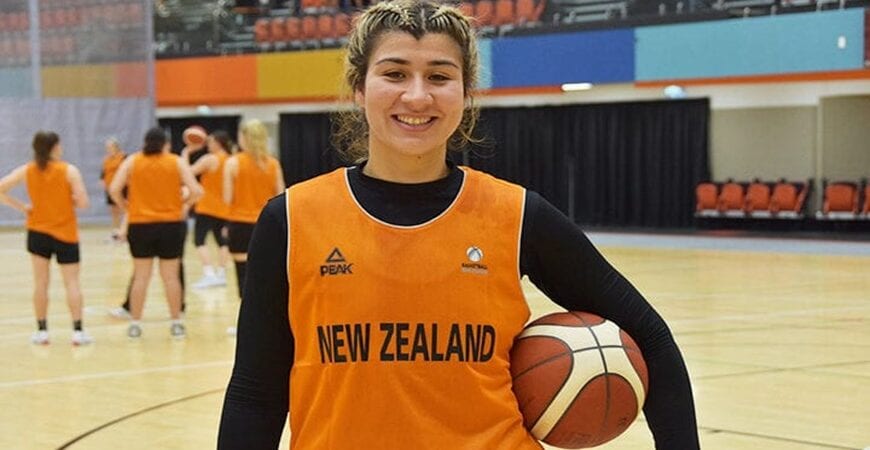 Harbour Breeze forward Ashleigh Kelman-Poto smiles when it is pointed out to her that at the ripe old age of 28 she is the senior member of the 24-player Sky Sport Tall Ferns squad training for the showcase game on Saturday.

“The first time in camp and I’m the oldest player, some of the girls were born in 2002,” she mused.

“I’m so pleased to have finally made it into the squad. At the same time you realise how hard you have to work. You think you are training hard but, when you get to the next level, you think wow I’m really not doing enough. It’s taken me this long to figure it out.

“The aim in camp is to train as hard as we can so we can put on a good show on Saturday.” Kelman-Poto is the only mum in the squad with three-year old Jai at home under the caring watch of her parents Motu Poto and Julie Kelman.

With younger brother Dominique playing for the Franklin Bulls in the Sal’s NBL, basketball is a dominating force in the Kelman-Poto family.

“I’ve been very envious watching him and all the men’s teams playing. Watching is the next best thing to playing, but I hope very much the Women’s NBL will go ahead later in the year.”

Thankfully that is looking likely, with an announcement on that NBL League expected in the coming weeks. To see Kelman-Poto back playing for Harbour Breeze would be a treat – last year she averaged 13.2 points and 8.2 rebounds per game. She was a standout in the Grand Final when she recorded 18 points and 9 rebounds.

Brought up in a sports mad household, Ashleigh began playing basketball at Maungatautari School near Cambridge.

“We went to all mum’s trainings and sat on the side-line when she was playing for Waikato Wizards,” she remembers.

“We beat Auckland Grammar School in the netball final which was so nice,” she reflected fondly.

Following high school, Kelman-Poto spent four years at college in the United States. She attended North Idaho Junior College (2011-12) followed by three years at East Central University NCAA Division II school in Oklahoma from where she graduated with a degree in Kinesiology.

When she returned to New Zealand, she initially played in the Beko Netball League for the Northern Marvels, but sport was put on hold to become a Mum to new baby Jai. Not long after Jai’s arrival, Ashleigh decided to take on a fresh challenge and move to Australia to play for Gladstone City Power in the Queensland Basketball League in 2018.

“Initially I was going to give up basketball to look after Jai, but when the opportunity came around I thought ‘why don’t I just take Jai and do it’.

“It was very hard and I was very unfit, but Gladstone were giving me a chance to play the sport I love as a professional player.

“My friend Milomilo Nanai was going to the club and she asked if I was interested in going also. She said you can bring baby also so I said I’m coming.

“I took Jai to trainings, I took him to games and the team were really supportive, he had ten mums, they loved him and he loved them.”

For Ashleigh, basketball continues to be a true passion and her dream of playing for the Tall Ferns seems that much closer to reality through this camp.

“I still have the drive and love basketball so much. I will keep working at it until I can’t play anymore. I have great employers in Harcourts JK Realty which allow me the opportunity to be flexible with my work hours enabling to have time to train and have wonderful support from my family.”

You can bet the Kelman-Poto family will be courtside for the Showdown at 5pm. Come Saturday afternoon it may be the turn of Dominique to sit side-line at Trusts Arena and support his sister. And if the Franklin Bulls make it all the way to the Grand Final, he will step on court soon after his sister to compete for the 2020 Sal’s NBL title.