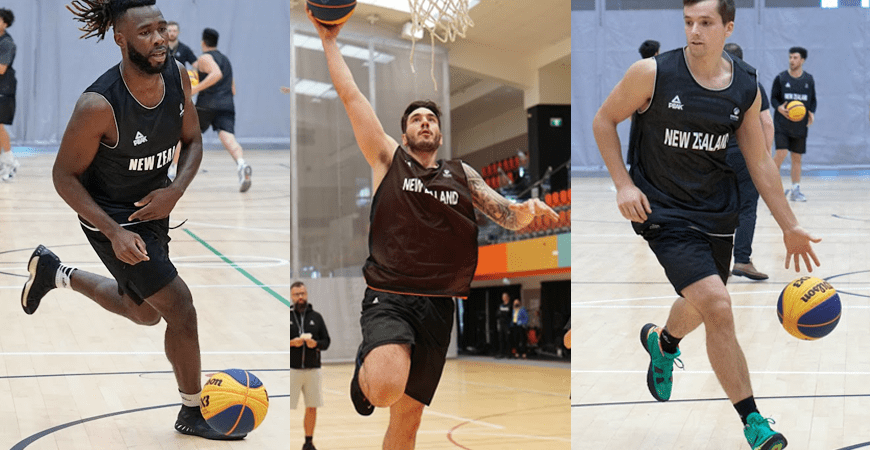 An Auckland-based 3X3 team is winging its way to the Philippines today, as it prepares to compete in the FIBA World Tour Manila Masters tournament in Manila this weekend.

The FIBA 3×3 World Tour Manila Masters tips off on 28 and 29 May, with 13 teams set to compete at the Ayala Malls in Manila Bay. The competition also features a staggering USD 127k prize pool on offer, including USD 40k being awarded to the team which finishes in first place.

This is the second of 13 stops in the 3×3 World Tour 2022 season, the biggest ever in FIBA history, following the opener being held in Utsunomiya, Japan earlier this month.

The original quartet of players Chris McIntosh, Zach Easthope, Ben Castle and Denhym Brooke earnt their ticket to this tournament following a thrilling Finals victory at the YouthTown 3X3 Quest Tour in April. With Brooke unable to travel to Manila due to his NBL commitments with the Franklin Bulls, Sam Aruwa has stepped in as his replacement.

As one of the three lowest-ranked teams in the tournament, the Auckland NZL team will need to first win a qualifying draw which pits them against Yokohama (Japan) and Melbourne (Australia). If they can win this draw, they’ll be added to ‘Pool B’ comprising of No.2 seed Antwerp (Belgium) and No.7 seed Sansar MMC Energy (Mongolia) – the latter hoping to re-capture their form after finishing runner-up at Asia Pacific Super Quest 2022.

Easthope is one of two players currently in the Sal’s NBL, appearing for the Franklin Bulls while his 3X3 teammate McIntosh suits up for the Auckland Tuatara. Both players, as well as Aruwa, are also taking part in the 3X3 Tall Blacks National Selection Camp – which is in its third and final day at Auckland’s Pulman Arena today.

Easthope says that he is excited, both to head to Manila for the first time and to compete in 3X3 basketball for his country.

“Any time you get to represent New Zealand on the world stage, that’s something to be pretty proud of, so I can’t wait for this,” says Easthope.

“We’re quite fortunate to have been in this 3X3 [National Team Selection] camp as part of our build-up for it, normally in the past we’d compete in tournaments without much playing time together beforehand – and Piet [Van Hasselt, 3X3 Tall Blacks Coach] has been trying to replicate the physicality that we will experience on the world stage.

“So this is definitely a huge help as it helps us to be ready for Manila, and I know Sam, Chris and Ben all feel the same way. And we’ve been really lucky to pick Sam up as a replacement player for Denhym; he’s a great player.”

Easthope says that he is familiar with some of the other players they will encounter in Manila, and is prepared for a tough battle during the qualifying draw and – if they advance – the Pool B teams beyond that.

“Some of the teams I recognise from a few other 3X3 tournaments I’ve been to; the Mongolian and the European teams in there, they’re constantly in the top 10 in the world and they always do very well in these World Tour stops.

“We know it’s going to be pretty full on, lots of teams and lots of experienced players – and it’s a great chance for us to gain experience too.”

The Auckland 3X3 team will compete in the FIBA 3×3 World Tour Manila Masters this Saturday 28 and Sunday 29 May. New Zealand viewers can catch all the action live at www.youtube.com/FIBA3x3

Exciting, urban and innovative, 3×3 is inspired by several forms of streetball played worldwide and is considered the world’s number one urban team sport. Steered by FIBA, games see two teams of three players face off on a basketball half-court.

It was played successfully for the first time in international competition at the 2010 Youth Olympic Games in Singapore and since then has benefited from the launch of a yearly professional circuit for men and women (World Tour and Women’s Series respectively) and national-team competitions.

3×3 made its Olympic debut at the Tokyo 2020 Games and is set to debut at the Commonwealth Games in August this year.