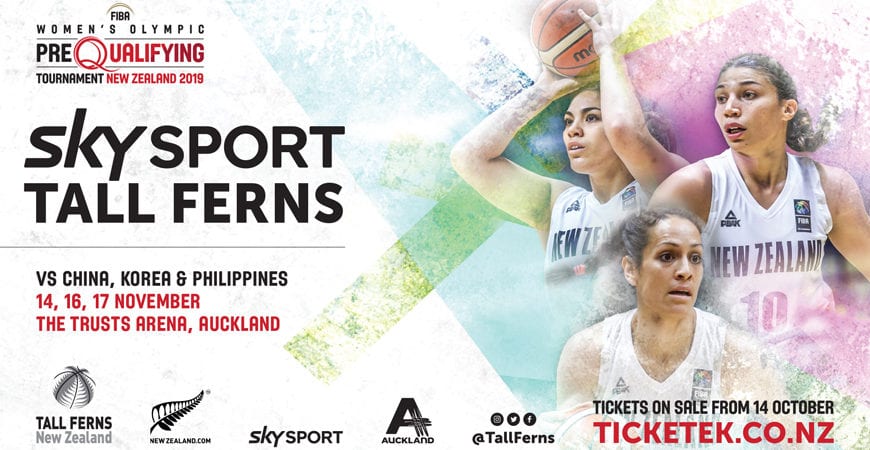 For the first time since 2015, the Sky Sport Tall Ferns will play in front of home fans when they take on three of Asia’s big basketball nations as part of the FIBA Olympic Qualifying series, held from 14-17 November at The Trusts Arena in Auckland. The visiting teams will be China, Korea and the Philippines.

The event has been made possible thanks to the strong support from New Zealand Major Events, Auckland Tourism, Events and Economic Development (ATEED), and Sky Sport. Considering the Tall Ferns have only played four tests in New Zealand within the last decade, this backing is momentous.

Economic Development Minister Phil Twyford said the Government is proud to be investing in the international tournament.

“This event offers an amazing opportunity to showcase basketball and celebrate the women’s game.  As one of our fastest growing sports, the tournament is an ideal platform to encourage more women and girls to participate in sport and active recreation, and also take up leadership in sport, which Aotearoa New Zealand has a strong focus on.

“Having the Tall Ferns compete on home soil allows fans to come out and support our national team, building national pride for New Zealanders.

“We are very much looking forward to hosting teams and their supporters,” says Minister Twyford.

Auckland’s support through ATEED helped secure the event for the city and New Zealand, and Mayor Phil Goff says one of the successes of the event will be its legacy.

“This event will inspire the next generation of players in this immensely popular sport and promote Auckland as both a world-class destination and premier city for women’s sport. As current host for the secretariat for the International Working Group on Women in Sport, we are proud to partner with an event that shines the spotlight on our premier athletes and brings another code to the exciting calendar of elite women’s sporting events coming up for Auckland.”

Basketball New Zealand Chief Executive, Iain Potter, says this is another big boost for the sport, which is already riding a wave of popularity in New Zealand.

“What a thrill to bring this event to Aotearoa. The Sky Sport Tall Ferns can climb the rankings and have strong chance of making the Tokyo 2020 Olympics. The team have drawn a great pool and we know the Chinese, Filipino and Korean ex-pat communities will come out in force to support their teams,” says Potter.

Basketball has achieved mass popularity in each of those nations, with Filipino basketball supporters famous for their patriotism and fanatical fanfare. The Auckland Chinese community came out in force in 2018 when China played the Tall Blacks at a sold-out Spark Arena. With Olympic tickets on the line, each of these teams will surely bring their best available rosters.

“It’s been a long time since we’ve hosted a women’s international basketball event, but none bigger than this. These are major games with a great prize riding on the results – all nations will be desperate to move to the next round,” says Mr Potter.

The top two nations will go through to a final round of 16 teams, to be played in February next year (host nation to be announced by FIBA). Of those 16 teams, the top 12 will qualify for the Tokyo 2020 Olympics.

This is the start of a new and exciting women’s competition system for FIBA, with more than 100 teams taking part in the new system, that includes a new qualification system for the FIBA Women’s Basketball World Cup 2022. (More on the qualifying system on the FIBA website here).

Sky Sport, who recently became the naming sponsor of the New Zealand Tall Ferns, will be broadcasting all of the games live.