Noel Hayman was the first Tall Blacks captain in 1947, and was arguably the preeminent player in New Zealand in the post-war years.

In 1949, Hayman led Wellington to the National title. He also led North Island to a 39-34 win against South Island in the annual challenge game and again captained the Tall Blacks against the Mormons in 1950.

In 1951, Hayman also took on the tasks of Manager and Coach of the NZ Universities team that toured Australia, one of the earliest representative basketball teams to have ventured across the Tasman.

1953 was to be the last National Championships that Hayman played at before heading to America.

However, it was in the Otago colours that Hayman suited having enrolled at Dunedin College of Education to gain a physical education qualification.

Otago proved too good for all opponents and no doubt Hayman took great delight in getting one over on his former teammates as the southerners defeated Wellington in the final.

Fittingly Hayman was awarded the Monk Trophy for Most Outstanding Forward and selected for the New Zealand Team for the seventh straight year.

That was Hayman’s last season playing elite basketball, stepping back from the national scene with five New Zealand titles to his name.

Perhaps it was his love of basketball that took Hayman to Springfield College, Massachusetts in 1954.  After all Springfield College is known as the ‘Birthplace of Basketball’ as the game was created by faculty member James Naismith in 1891.

Next stop for Noel was another famous basketball institution in the States – University of Oregon where Hayman earned his Doctorate in 1959.

The award was accepted by Noel’s family. 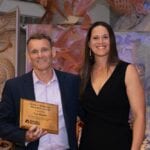