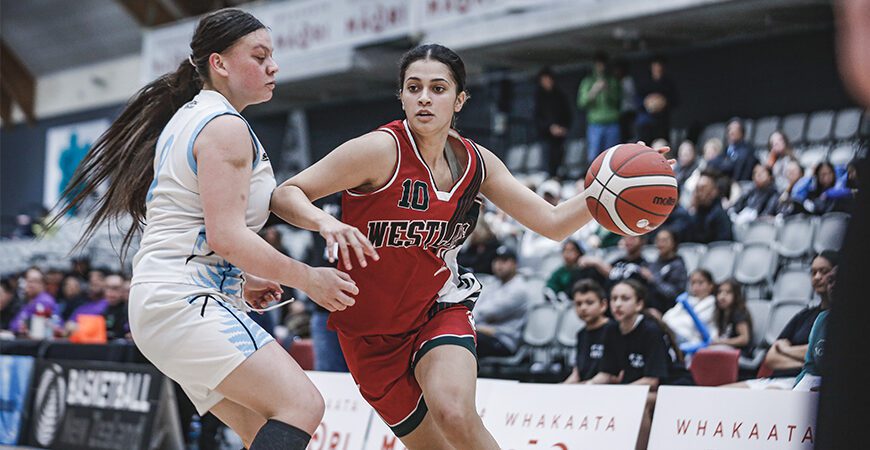 The ‘AA’ Finalists were found on Day 5 at the 2022 Basketball New Zealand Secondary Schools National Championships in Palmerston North on Friday.

The Boys Final will be between Christ’s College and Rosmini College while the Girls Championship game will feature St Andrew’s College and Westlake Girls High School.

The first Boys semi-final  was a battle between the Premiership Champions from Zones 2 and 4 and it was the southerners, Christ’s College, that came out on top against Rotorua Boys High School winning 86-75 on the back of 28 points from Hunter Adam and 24 points from Tom Harrison.

Rotorua made the slower start giving up the first 6 points although they struck back with the next half dozen before taking the lead at 10-9.

Rotorua guard Xanda Marsters made 7 early points, his team ahead 15-14 at the ten minute mark.

Christ’s forward Adam made the first two baskets of the second period to give his team the lead.

It remained a one possession game until Harrison sank a triple to push Christ’s out to 27-21 at the mid-point of the period.

Marsters dropped his second triple and when the same player made an open layup it was a one point game.

Jacob Clements opened the second half scoring with a corner three and when a Harrison transition basket followed the Christ’s lead was in double figures (42-32).

KC Nwafor replied with an inside make but was then forced to the bench for a spell after picking up his third foul.

Adam went coast-to coast to earn a pair of free-throws – the Cantabrians ahead 51-38 with four minutes to play in the frame.

Rotorua’s Hamuera Moka made a tumbling layup before Harrison made one in a more conventional fashion.

A heads up play from Jordan Brathwaite meant Christ’s won the period 27-17, despite 9 points from Christian Vano to take a 64-49 lead into the fourth.

Vano made the opening score of the final term and Nwafor’s dunk soon followed but Christ’s remained in control with a 75-59 lead after an Adam triple.

Raerino reduced the deficit to 14 points and Vano to 11 points (77-66) with four minutes to play.

Harrison’s floater was countered by Vano’s pair of freebies – another basket apiece set up an intriguing finish – Christ’s 81-70 ahead with two minutes to play.

The intrigue diminished after a Liam Jack score but was on the rise again following another Vano triple.

Nwafor’s dunk was one for the highlights reel but it was Christ’s that will look back on the replay with the most satisfaction.

Despite a 38 points haul from captain Riley Tuuta New Plymouth Boys High School were defeated 85-70 by Rosmini College in the second Boys Semi-Final.

Rosmini forward Julius Halaifonua opened the scoring with an inside catch and make, Tuuta with the first score for New Plymouth, 7-4 the early lead for Rosmini.

A Tuuta triple gave New Plymouth its first lead of the game midway through the opening period (9-7) – Zavier Adam extending the advantage by three.

Dalton sunk a long three for Rosmini but Tuuta (11 points in the quarte made a layup on the quarter time buzzer to give New Plymouth a 20-17 lead.

Beattie and Tuuta exchanged triples before Adam sunk another from deep to keep New Plymouth in the ascendancy (26-22).

Jameer Reed put Rosmini back in the lead (32-29) with 4 minutes left in the half – not for long though as Eli Poulgrain tied the contest.

Rosmini put together an 8-2 run but Tuuta (21 points in the half) made his third 3-pointer of the spell – Rosmini ahead 40-37 at the interval.

The scoring slowed at the start of the second before Adam again tied the contest.

Beattie joined Tuuta with 20+ points ahead of a corner three from Josh Batty; 53-46 the Rosmini lead.

Kane Murphy made back-to-back threes  but Tuuta, the main scoring pipeline for New Plymouth, had 33 points at three-quarter time to keep his team in contention, trailing 65-55.

New Plymouth responded with the next 5 points – Rosmini making the next 6: 78-64 with 5 minutes to play.

New Plymouth forward Gareth Washer made a transition basket and a bonus free throw – Murphy responding with his third triple; 81-67 with 3 minutes left.

Tuuta had one last score in his locker but it was Rosmini heading to their fourth straight ‘AA’ Grand-Final.

Despite a spirited fourth quarter effort from Tauranga Girls College it was St Andrew’s College that earned a trip Saturday’s Girls ‘AA’ Grand Final after recording an 84-72 victory in the first Girls semi-final.

Tauranga outscored St Andrew’s by 12 points in the fourth but the earlier work of the Canatabrians, on the back of the efforts of Maddie Morrow and Kavanah Lene, secured the win. Morrow made 7 3-pointers on her way to a game high 29 points while Lene stuffed the stats sheet with an impressive 24 points, 15 rebounds, 2 assists, 2 steals and 3 blocks

Tauranga opened proceeding with the first 5 points before Morrow replied for St Andrew’s College (StAC) with a three – Maia Kahura then matched that for Tauranga.

Lene gave StAC their first lead of the game, then pushing the advantage out to 15-9.

Eden Tapsell replied for Tauranga after some neat pick and roll action – Honey Cooney making it a one possession game.

NZ U18 representative Morrow made 8 points to begin the second but Tauranga found a route to basket via Cooney and Kiritiana Patea; 35-29 the StAC advantage.

Karereatua Williams was next to make a three – StAC establishing a 10-point lead.

Lene led all scorers and rebounders at the break with 16 points and 9 boards.

Lene and Hyland opened the second half accounts for each team before Ella Sharpe made a trio of inside baskets to extend the StAC advantage to 57-40 – Tauranga needing a timeout.

Charlotte Seddon’s score on the resumption took the StAC lead to twenty before Cooney reduced that by five (60-45) and it was then the Southerners that required a timeout.

Sisters Molly and Maddie Morrow made back to back threes either side of a Toki score – StAC appearing in total control at three-quarter time with a 73-49.

Spurred on by their supporters a rejuvenated Tauranga outscored StAC 26-11 in the final period but the three-quarter time deficit was just too much to overcome.

In the second Girls semi-final, a rematch of the Zone 1 Premierships Final, Westlake Girls High School beat Whangarei Girls High School 95-72 on the back of 20-point hauls from Izzy Pugh and New Zealand U18 captain Mackenzie Chatfield.

Westlake opened with the first 12 points of the contest, six of those to Mackenzie Chatfield.

Kiama Tahere made the opening three points for Whangarei, Terina Cameron the next three.

Chatfield made the initial three of the game for Westlake although Neta Palmer hit back immediately with a trey for the northerners.

Cameron made her second three although with Chatfield scoring 16 points Westlake had the quarter time lead (28-19).

Waipaira Reti knocked down her second three of the contest before Izzy Pugh responded with an And-1 play.

Tahere’s floater was countered by a Hannah Richardson score – an Amiya Fotu triple taking Westlake to a 51-33 half-time lead.

Cameron had 10 points for Whangarei at the interval with Chatfield (19 points) and Pugh (10 points) in double figures for Westlake.

Tahere nailed the opening three of the second half before Fotu pushed the Westlake advantage back over twenty points.

An 12-2 Whangarei run followed as Whangarei closed to 62-48 before Fotu sunk a deep triple.

Westlake scored the last 4 points of the period to lead 71-52, Whangarei’s Tahere making an impressive 12 points in the quarter.

Whangarei needed a good start to the fourth and received it via scores from Neta Palmer and Tahere before Chatfield sunk a corner trey.

Tahere kept finding a way to basket but Rebecca Moors made a brace of baskets to improve the Lake lead to 83-68 with three minutes to play and with Pugh punishing with points  inside the Westlake win was assured.

Tahere took her points tally to a game high 30 points – an effort that epitomized the spirit of her team.

An interested observer over the last couple of days at Nationals has been Brad Davidson the University of Hawaii Assistant Coach – Men’s Basketball.

A former Australian Boomer Brad played a season each with the Manawatu Jets and Taranaki Airs and maintains a watching brief on the up and coming talent in New Zealand.

St Peter’s School, Cambridge’s recent dominance of the Girls ‘AA’ tournament has come to an end. Winners of 4 of the last 5 championships, and runners-up in the other, St Peter’s were beaten by Westlake Girls in the quarter-finals. Amazingly just their 4th loss in their last 53 games at the Championships.

Amongst the eight competing schools in the Boys and Girls ‘AA’ semi-finals only Rosmini College had previously reached the Grand Final.