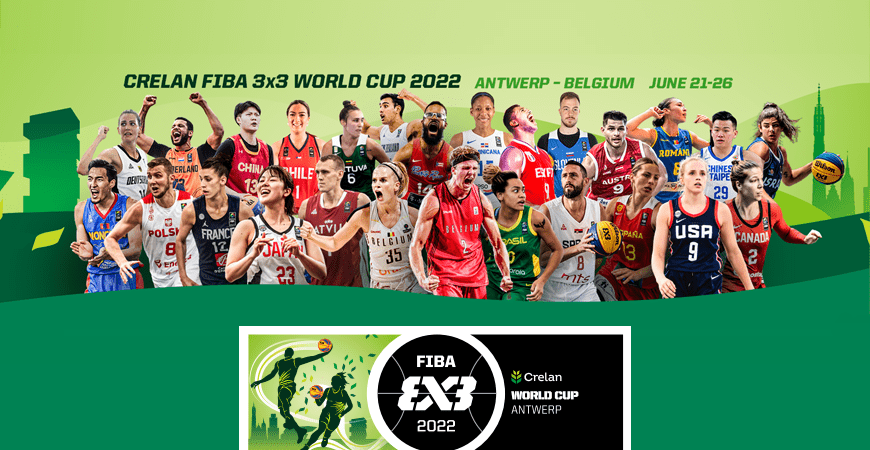 The Crelan FIBA 3×3 World Cup 2022 has arrived after a three-year absence, with 40 of the world’s top teams – including the 3X3 Tall Blacks and 3X3 Tall Ferns – set to compete in Antwerp, Belgium over the next six days.

The Crelan FIBA 3×3 World Cup 2022 will feature four pools of five teams competing in both the men’s and women’s categories, all fighting to be named 3×3 World Champion; an honour currently resting with the USA’s men and China’s women teams. And for the first time, only the Pool winners qualify directly to the quarter-finals, while teams ranked second and third move on to a play-in eighth-final.

Both New Zealand teams earnt a ticket to the FIBA 3×3 World Cup after going undefeated in the FIBA Asia Qualifiers back in March. This will be the 3X3 Tall Blacks fifth time in the 3×3 World Cup, with their last run back in 2018 where they finished in 13th place. The 3×3 Tall Ferns are heading to this event for the third time, having secured a 10th place finish in 2019.

Although they carry an ‘underdog’ status heading into this tournament, 3×3 Tall Blacks star Tai Wynyard says that he believes both teams have the ability to progress far.

“Coming into this tournament, we are underdogs – we haven’t really proved ourselves on the 3×3 world stage yet,” says Wynyard.

“But we also know that going into this, teams aren’t going to take us lightly. In the 3×3 game, you can never take anyone lightly, anyone can win the game [on a given day]; the top-ranked team can lose to the bottom-ranked team.

“We’re just going to go into every game, ready to win – whether we’re down four or up four you can still lose or win – so we’re going to have what we call a ‘dog mentality’ of never giving up and constantly fighting to win.”

3×3 Tall Ferns head coach, Justine Reed believes that although her squad is playing a lot of 3×3 games in a short amount of time – with the FIBA Asia Cup and Commonwealth Games taking place shortly after the FIBA 3×3 World Cup – it does have its advantages.

“All these games are helping our players to progress really quickly as a team; it [3×3] is front of mind for them and for us as well,” says Reed.

“I think it’s going to help us so when we get to the Commonwealth Games [at the end of July] we’ll have that experience of playing together – every day we play makes us stronger.”

3×3 Tall Blacks head coach, Piet Van Hasselt says that his team has a chance to make some serous noise at this event – which is good for Aotearoa, and also for the steadily-growing game of 3×3 in New Zealand and around the world.

“Obviously the 3×3 being in the Olympics was a big bonus for the sport, FIBA are really pushing it and it’s growing steadily around the world,” says Van Hasselt.

“We’ve got a lot of people in New Zealand who play a game of 3×3 and then want to play it for the rest of their lives; we’re really fortunate to have all of our top national players show a real interest in this game, so we’re able to bring a strong team to this World Cup.”

Supporters can also keep up-to-date with the results and latest standings at https://www.fiba.basketball/3x3WorldCup/2022