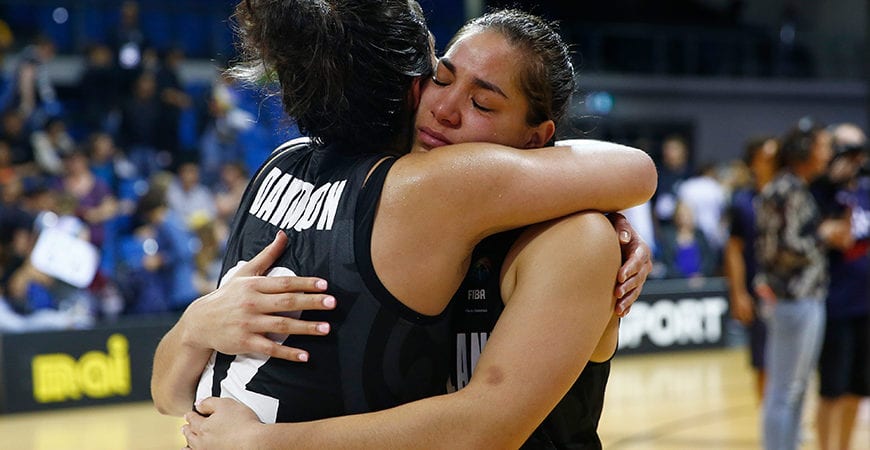 The Sky Sport Tall Ferns recorded one of the most notable victories in New Zealand women’s international basketball history, but the margin of victory wasn’t enough to carry the Kiwis to the next stage of Olympic qualification.

In an enthralling contest, played in front of an enthusiastic and vociferous crowd at Trusts Arena tonight, the Tall Ferns beat Korea 69-65.

The day began with China overwhelming the Philippines 127-49 meaning that New Zealand, China and Korea each had two wins from three games at the Qualifying Tournament.

With points differential deciding the final placings, it was China (+22) and Korea (-3) that pipped New Zealand (-19) to book their places at the next Olympic Qualifying Tournament in February.

“It’s certainly a bitter sweet feeling. We came here and got the job done that we wanted to do winning two games – I guess I’ll blame China (who surprisingly lost to Korea on the opening day of the tournament).

“Funny things can happen in tournaments, Korea had an amazing win against China so we had a big ask today, but I couldn’t be any more proud of the team.”

“We talked about how hard it is to win at this level. It’s exciting for our programme that we were able to get a win, but it’s disappointing that we have been stopped in our tracks for the Olympics. I’m also really proud of the girls and the performance today.”

Playing to win by a margin is not unique but Molloy conceded it’s a big task.

“I’ve been involved in situations before where you have to win by margins and it is so difficult. You are playing well, you are six or eight points up but you are playing like you are in desperate circumstances. It’s a very unusual psychology, but hey we will learn from it.

“We have some wonderful veterans in Nat (Taylor), Mic (Cocks) and Toni (Farnworth) who played their hearts out tonight. We’ve got an emerging group with people such as Kalani (Purcell), Penina (Davidson) and you can see where they are going in the future. Then we have some babies at the bottom end of it who just need to learn from this experience and soak it up. I just hope that they have done this, and we can bank this and keep raising the standard.”

The Tall Ferns were dealt a blow on the morning of the game when Ashleigh Karaitiana, who scored 17 points against China on Saturday, due to injury.

Needing to win the contest by 12 points or more to advance to the next round of qualifying, New Zealand made the perfect start winning the opening quarter by 13 points to lead 21-8 at the first break.

A Toni Farnworth (15 points) four-point play put the first points on the board for New Zealand and when she scored in transition off a steal the Kiwis were 8-3 ahead. When Penina Davidson (24 points and 15 rebounds) unleashed six straight points Korea needed a timeout trailing 14-5.

The Tall Ferns offence spluttered in the second as Korea upped their defensive intensity. Inspirational play from Purcell (16 points, 10 rebounds and 6 assists) at the back end of the quarter ensured the Tall Ferns entered half-time with a 37-28 lead. Toni Farnworth led all scorers at the break with 13 points.

With Korean WNBA star Ji Su Park sitting out, the Tall Ferns pumped the ball inside to Davidson who delivered six straight points to maintain the Kiwi’s double figure lead.

Davidson took her tally to 20 points, but Korea began to find their range from the three-point line and reduced the margin to five points (50-45).

New Zealand were still five points ahead at the start of the fourth, but when Purcell scored with a long three the lead was 61-50 and the targeted 12-point-plus victory was tantalisingly close with 7:28 to play.

New Zealand were rolling the dice at that stage with Purcell, Farnworth and Cocks all on four fouls.

Molloy admitted that playing for margins creates different thinking and he needed to leave the three starters on the floor.

“There was not much to gain in subbing them out at that stage of the game, I had to trust them to get the job done and I would do the same again in similar circumstances.”

A Chevannah Paalvast three made the lead 65-54, but New Zealand were dealt a major blow when Purcell fouled out with five minutes to play.

With the lead at the tipping point of 12 with four minutes to play, Korea scored on consecutive plays to close within seven (65-58).

A Stella Beck drive made it 69-60 but Korea found a triple to trim the New Zealand lead to 69-63 with under two minutes to play.

The Tall Ferns pressed looking for extra possessions but time was their enemy.

Taylor admitted playing in front of home fans had been a treat, with the crowd on their feet, willing the Tall Ferns on in the last quarter.

“Playing at home has been a real pleasure for all of us. It didn’t quite get us over the line today, but it’s been a good experience. It doesn’t happen very often and I think we made the most of it,” reflected the shooting guard.

“We have talked a lot about impact and legacy,” said Molloy.

“The support was fantastic today which was awesome. The Tall Ferns really hope that women’s basketball gets a huge push and momentum surge and I know the players are really hoping that their efforts have inspired a bunch of young players to say ‘I’m going to play basketball and make it my sport, I want to get better and become a Tall Fern’.