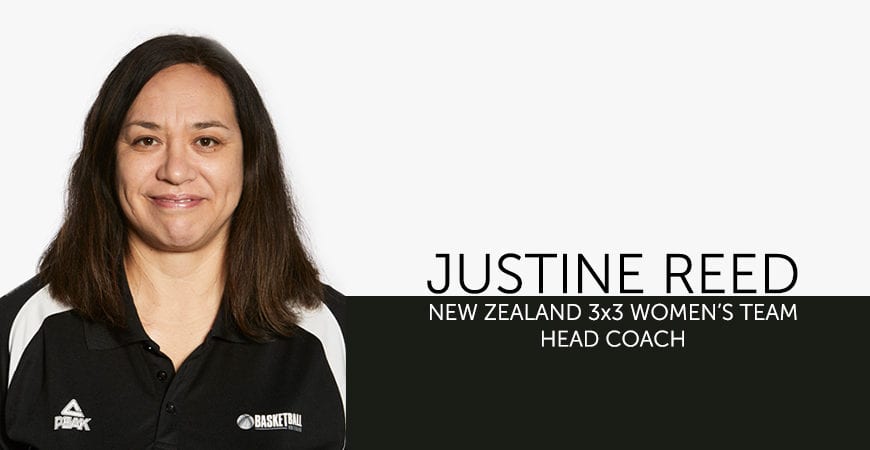 This appointment is well-earned with Reed rising through the 3×3 coaching ranks and the Basketball New Zealand system. Notably Reed took a talented Under 18 3×3 team to the FIBA U18 3×3 World Cup last year, where the Kiwis stunned the tournament and secured a silver medal. Coach Reed says the top job is something she has been working towards.

“I am very humbled to have been entrusted with this position. I have been fortunate to have many coaches and people around me, who have supported and encouraged me along the way, which I am very grateful for.

“My involvement with Basketball New Zealand over the last five years has helped to prepare me for this role and I am very excited for the opportunity. I am looking forward to building a successful 3×3 women’s programme and working with our athletes,” says Reed.

Reed says that every team she has coached has left an impression and it’s a challenge to just separate one or two highlights in her coaching career, but the silver at the Under 18 World Cup is right up there.

“Of course the girls coming second at the World Cup was a highlight, and probably my first national title as a head coach at 2012 Under 15 Nationals, but the biggest highlights for me are when I see girls that have worked hard, set goals, trusted the process and finally achieved their basketball goals, whatever those are. It is even sweeter when they are then rewarded with the chance to represent New Zealand, play pro or earn a scholarship.”

The 3×3 format has steadily increased in popularity and professionalism around the world, and the New Zealand women’s team have made some great gains including the Gold Medal at the 3×3 Asia Cup in 2018 and winning a Bronze at an Olympic Qualifying event in May 2019.

“I definitely think that 3×3 is going to get more popular. Since I have been involved, there have been so many more opportunities opening up for women to play and I believe that in the next five to ten years, there will be a large number of women able to make a career out of it.

“With the 2022 Commonwealth Games only offering 3×3, I believe that there will be great opportunities for us to medal, so it is important that we are setting up the right foundations for success now. We do need to increase the number of New Zealand women playing 3×3 in registered 3×3 tournaments – one of the criteria that FIBA uses to select teams for its world events is partly based on the ranking of the Top 100 players in the country, so I have been trying to get the word out to all our women ballers to enter as many 3×3 events as they can such as the Quest Tour.

“We have also been trying to educate the coaches about how they can run their own 3×3 leagues and tournaments, which help generate points, and how they can use 3×3 to assist in the 5×5 game as there definitely is some cross over that can be achieved,” say Reed.

Basketball is a sport that runs deep within Reed’s family. Coach Reed’s husband is a basketball referee, her daughter Tera (21) is playing scholarship basketball at Virginia Commonwealth University in the US. Her son Jameer (12) is in Year Eight at Rosmini College, he is both a player and referee. Reed also coaches regularly for the Harbour Basketball Association.

Reed also enjoyed a strong career as a player, with over ten plus years playing in New Zealand Women’s basketball Championship for Waikato, Auckland, Waitakere and Harbour – during that time she played for three National Championship winning teams. She also spent four years at the University of San Diego on a NCAA Division I basketball scholarship (1994-1998). In 1999 she played for the Tall Ferns.

Outside of basketball, Coach Reed is a Chartered Accountant balances basketball and family with her fulltime job as an Associate Director in the Tax and Private team at Deloitte where she recently joined the Māori Services team.

So how does she balance it all?

“It can extremely hectic, especially in Term Two and Three, but I wouldn’t have it any other way. It takes a great deal of support from my family and friends, good time management and lots of spreadsheets!”

Reed takes over the role from Anthony Corban. Basketball New Zealand’s High Performance Director Leonard King says Coach Corban will not be taking up the men’s or women’s Head Coach role in 2020.

“Anthony‘s 3×3 experience has been built up over many years, a vast amount of that leading New Zealand teams. He’s done a great deal for the 3×3 programme and taken the majority of our international 3×3 teams abroad, helping secure some major titles along the way including U18 World Cups. His work has helped set the foundation of this programme and we will see more of Anthony in other areas of our BBNZ programme,” says King.

It’s fitting that Reed is handed the reins. She will take on the challenge not only as a coach, but also as an ambassador of women’s basketball.

“I just want to reiterate the fact that we need more women playing 3×3. It is a fast, dynamic game that is lots of fun to play. Most women and girls that play fall in love with the game. All you need is a half court with a hoop and a ball. I would definitely encourage everyone to give 3×3 a go,” says Coach Reed.