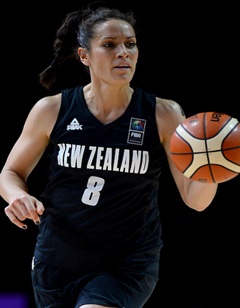 Taylor (nee Purcell), older sister of Kalani and younger sibling of former international Charmian, debuted for the Tall Ferns in 2007.

Was a member of the Tall Ferns team that won bronze at the 2018 Gold Coast Commonwealth Games.

Played all 5 games at the 2019 FIBA Asia Cup in India averaging 6.2ppg. Played all three games at 2019 FIBA Olympic Qualifying Tournament in Auckland.

Taylor scored 25 points in the 2019 WBC Grand Final to lead Auckland Dream to the title.

Played at the 2008 Beijing Olympics and then played for Logan Thunder in the Australian WNBL before marrying professional rugby player Ezra Taylor and heading to Ireland.

Natalie helped University of Limerick to the 2011 Irish Superleague title and was named Import Player of the Year.