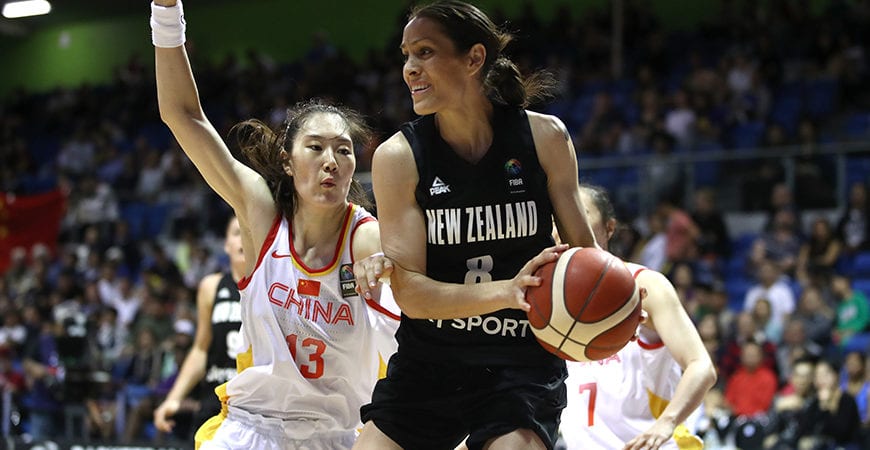 In front of close to three thousand fans in Auckland’s Trusts Arena, the Sky Sport Tall Ferns were defeated 94-71 by China in the Olympic Qualifying Tournament on Saturday evening.

Despite the loss, the Tall Ferns Olympic hopes are still alive – a win by 12 points or more against Korea on Sunday will secure the Kiwis passage to the final Olympic  qualification tournament in February.

New Zealand were paced by outstanding performances from Ashleigh Karaitiana (17 points) and Kalani Purcell (21 points, 5 rebounds and 4 assists). Toni Farnworth scored 9 points and Penina Davidson battled away for a valuable double of 8 points and 8 rebounds.

Purcell’s highest points haul in a black singlet was of little comfort to the Tall Ferns captain.

“Yes, it’s nice to have played well personally, but we didn’t win the game and we didn’t play well in the first half. We need to play Tall Ferns basketball against Korea tomorrow.”

Tall Ferns Head Coach Guy Molloy, whilst disappointed with the result, complimented China on their performance.

“They shot extremely well making 62% from the floor and 59% from the three-point line. We needed them to have an off night like they did against Korea on Thursday, but it wasn’t to be.

“I felt we were off the pace in the first half, but we responded well in the second half losing by just a bucket.”

Molloy is confident his team will bounce back against Korea tomorrow.

“We will assess where we went wrong today, make the necessary adjustments and be prepared for the deciding game on Sunday.”

Assistant Coach Aik Ho, was far from despondent after the game.

“We actually played not too bad – on the stats sheet (the Tall Ferns only had 11 turnovers, shot 43% from the field and 50% from the three-point line) but China played even better than us. The differential is 12 or 13 points so we are excited about tomorrow, we are up for it. We need to go out there tomorrow and play as hard as we can, perform well, and make sure everyone is proud of us when we finish off.”

In the first game of the evening, Buoyed by the support of Chinese legend Yao Ming, the visitors took charge of early proceedings to lead 28-14 at quarter time.

China, utilising their height advantage, built their advantage to twenty points (44-24) at the 17 minute mark. Stella Beck hit a much needed three, but the Tall Ferns had plenty of work to do at half-time trailing 50-29.

Ten points in the third term from Ashleigh Karaitiana kept New Zealand in the contest, the vociferous home crowd warming to the Tall Ferns effort as they hung onto China’s coat tails.

China extended their lead to 28, but with Purcell leading from the front the Tall Ferns refused to wilt and despite the losing margin being 25 points New Zealand can still claim a top two finish in the tournament.

In the earlier game Korea made it two wins from two outings with a very comfortable 114-75  against the Philippines. Korea were 7 from 10 from beyond the arc in the opening quarter and never looked back from that point.

The game on Sunday is at 5.30pm with another good crowd anticipated.

The top two teams of this event in Auckland with go through to the next and final Olympic Qualifying round in February.

Schedule: Day Tickets start from only $8.50 (two games per day):