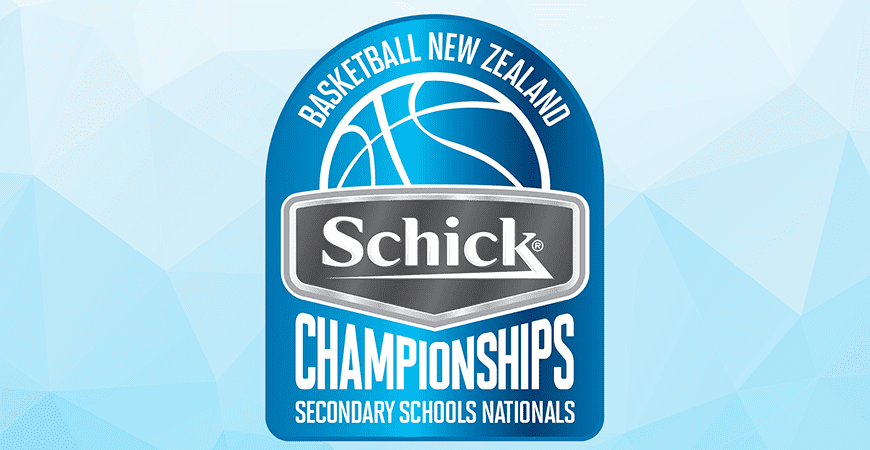 The four ‘AA’ Schick Premierships concluded on Saturday – the competitions that determine which 48 schools will be attending the 2019 Schick Championships in October.

Seven of the 24 spots available for the ‘AA’ Boys National Championship were on the line in Schick Premiership Zone 1.

St Kentigern College made up for the disappointment of losing the Auckland Premier League Grand Final a couple of weeks ago by claiming the Zone 1 Premiership crown with an 88-79 win against defending National champions Rosmini College.

As expected, the top six teams from the Auckland Premier Competition progressed safely, although 2019 Auckland Premier Champions Rangitoto College had to settle for fifth after beating Mount Albert Grammar in the 5th/6th encounter.

Auckland Grammar edged Westlake Boys 68-66 in the play-off for third with Whangarei Boys outlasting Liston College to claim a treasured seventh spot and break the Auckland schools’ monopoly. Whangarei, to the delight of their travelling supporters, won 89-74.

There were just five spots up for grabs in Rotorua in the Zone 2 Tournament with the all-Hamilton final won 97-69 by St John’s College over Hamilton Boys’ High.

Rotorua Boys High were too good for Gisborne Boys High in the 3rd/4th play-off contest, but both head to Palmerston North next month with high expectations.

Fraser High, Mt Maunganui College and  St Peter’s, Cambridge won’t be joining them. All three made the top eight but it was Tauranga Boys’ College that finished in fifth place.

In Zone 4 again with 6 spots, Christ’s College were a major casualty, failing to progress from a ‘Pool of Death’ that included Waitaki Boys High, eventual finalists St Andrew’s College and Middleton Grange.

Thomson Trophy winners Middleton Grange added the Zone 4 Premiership to their trophy cabinet going on to beat St Andrew’s 95-74 in the Final.

They will be joined at Nationals by Cashmere High (3rd) and Shirley Boys’ High (4th) with Otago Boys’ High and Nayland College claiming the fifth and sixth places – Otago’s ten hour drive back to Dunedin made a little easier with a place at the Nationals secured.

The Girls ‘AA’ Schick Premierships also determined the 24 teams that will head to Palmerston North next month. All zones carrying 6 spots making up the 24.

In Zone 1, the surprise qualifiers were One Tree Hill College who played their regular season in Open Grade, the third tier of Auckland Secondary Schools basketball. They claimed their spot after defeating Senior A champions Baradene College in a crucial play-off game. They will be joined by the top five Auckland Premier League teams; Westlake Girls’ High, St Mary’s College, Rangitoto College, Carmel College and Massey High School.

St Mary’s completed the double of Auckland Premier League and Premiership title with a 78-70 win against Westlake Girls’ High. Carmel College claimed third place, as they had in Junior Premierships earlier in the week, with a 92-60 win against Rangitoto College, while One Tree Hill edged Massey High 69-63 in the 5th/6th placing game.

Melville High shocked Rotorua Girls in the 3rd/4th play-off game, winning 73-54. In another upset result, Hauraki Plains College shocked Mt Maunganui College in one of the 5-8 placing semi-finals. Hauraki were defeated by Tauranga College in the 5th/6th placed play-off game but both teams are headed to Palmy North next month.

There was misery for Sacred Heart College, Lower Hutt who missed out on qualifying for the quarter-finals to Manukura and Hutt Valley High in a very tough Pool A. Manukura, the 2018 Schick Secondary Schools ‘A’ champions, and Hutt Valley High ended up contesting the 3rd/4th play-off game and will make the trip up State Highway One in October.

Rangi Ruru Girls’ College recently won the Whelan Trophy, the pinnacle of Canterbury basketball, but had to settle for third place.

Twelve Boys teams and twelve Girls teams will gather in Palmerston North in October to contest the 2019 Schick ‘A’ Secondary Schools National Championships.

With just 7 of the 23 competing Boys teams able to qualify, it was Opunake High that claimed top spot after beating a young Mana College team in the final. Also through are Manukura, who beat Te Aroha College, runners-up to Stratford in last year’s ‘A’ Schick Championships.

Stratford High School had won back-to-back ‘A’ Boys National titles, but surprisingly they will be absent from 2019 Nationals after failing to qualify at the North Island Tournament held at the Central Trust Arena in Palmerston North. Stratford lost the do-or-die 7th/8th play-off spot to Waihi College 99-78.

Nga Taiatea Wharekura and Melville High School are the other qualifiers.

Fourteen teams contested the South Island Boys Tournament in Greymouth, with St Kevin’s College, Oamaru going one better than last year to claim the title with an 85-61 win against Catholic Cathedral School from Christchurch.

Last year’s winners Hillmorton High were too good for Hornby High in their bout for third place. Hosts Greymouth High missed out on a place at Nationals, going down 83-55 to Kavanagh College in the play-off for the fifth spot.

Otago Secondary Schools Finalists Kavanagh College lived up to their favouritism tag by claiming the South Island Girls Premiership with a 57-42 Grand-Final win against Buller High.

Nga Taiatea Wharekura will head down to Palmerston North from Hamilton for the ‘Big Dance’ after defeating Reporoa College to claim the seventh and final North Island spot.

Schools who qualified for the Schick Championships;