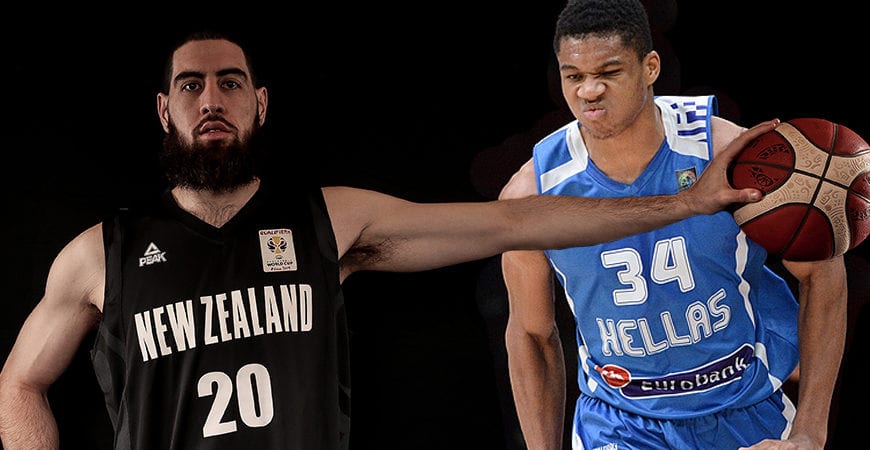 The New Zealand MBO Tall Blacks face one of their biggest challenges in years when they take on Greece tonight in Nanjing at the FIBA World Cup. The winning team will move through to the second round.

Greece was stunned by Brazil in their last match on Tuesday night when the South Americans snatched victory in the final moments to win 79 – 78. Brazil have shown Greece can be shaky when tested and Tall Blacks’ Power Forward Finn Delany says the Kiwis have taken notes.

“It was an interesting result with Brazil getting up over Greece – not what a lot of people expected, but it just shows that anyone can win on the day.

“We know that we can compete and beat anyone here, we bring that confidence and belief to any game. We control our fate, which is always a good thing. Win and we’re alive,” says Delany.

Indeed it is a do-or-die test. Talk from the New Zealand camp mirrors Delany’s – that of excitement and self-belief. That mindset counters the bookies who say NBA MVP Giannis Antetokounmpo and his high-level Eurogame teammates will school the Kiwis.

Part of Assistant Coach Ross McMains’ job is to study the opposition. He has already watched hours of game-footage in the limited time leading up to this match. With that study in mind, he’s quick to point out that New Zealand has what it takes.

“Greece are a talented team with players from all over the world at really high levels.

“Obviously head of the snake is Giannis with what he brings – just with his force, his athleticism, his speed in transition. Then there is a lot of really talented guys at the Euroleague level. Nick Calathe and Kostas Sloukas – both high-level point guards and talented play makers. They’ve got multiple wings with strength inside. They have a really experienced 5, Ioannis Bourousis, who was on the Greek team in 2006 when they beat the US, so a really talented group of players,” says McMains.

So what is the key to seeing the Tall Blacks pull off a major upset and become the talk of Nanjing? McMains says the answer is playing Tall Blacks’ style basketball.

“The biggest thing for us, like any game, is we have to embrace our way. We need to make sure this game is played on our terms, our style, and then we have to take in information that will help us combat some of the personnel that Greece presents.

“Our bigs have done an awesome job. For all the challenge that their bigs present, with Antetokounmpo and Bourousis, and [Georgios] Printezis – our bigs present one hell of a challenge in game-planning for them – so we are excited for that match-up.

“Between the Webster brothers, Tom, Shea, our whole group off the bench that’s been bringing a crazy amount of energy with E (Ethan Rusbatch) and Jordy (Jordan Ngatai), we have got a really great group there. Especially when we are playing our style – we’re pretty tough with the way we are able to put pressure on the rim and spread the floor.

“The exciting thing for us is that we get to control our own destiny. We win, we move on.”
The Tall Blacks v Greece game will be live on Maori Television at midnight tonight (NZT).