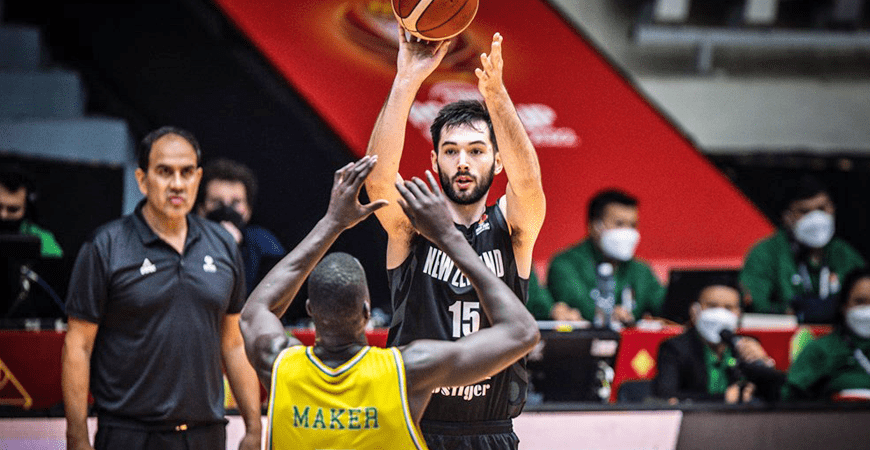 The Tall Blacks have fallen 76-85 to defending champions Australia in the semi-finals of the FIBA Asia Cup tonight, in a tense battle that was closer in the final minutes than the final score suggests.

After going into the half down by eight, the Kiwis mounted a comeback in the fourth quarter thanks to the play of Sam Timmins and Kruz Perrott-Hunt, before a flurry of Aussie threes sank New Zealand’s hope of a place in the grand final.

New Zealand were led by 16 points (including 10 in the fourth) and 8 rebounds from Sam Timmins, along with 16 points and 3 blocks from Jordan Hunt (4-4 from downtown), 15 points, 7 rebounds and 4 assists from Flynn Cameron and 11 from Perrott-Hunt. Taine Murray was held scoreless by the stingy Aussie defence in this one, while Taki Fahrensohn was limited to 4 points on 2/8 shooting (0/5 from outside).

Australia was paced by Thon Maker with 18 points and 9 rebounds, while point guard William McDowell-White has 15 points and 7 assists and Mitchell McCarron tallied 13 and 7.

Australia struck first in the game on a layup by Sam Froling, but Flynn replied from outside the arc; a dunk from Timmins putting the Kiwis up 5-2 early. Both teams were held to 25% shooting in the first four minutes of the game, as they tested each other out.

Back-to-back buckets from Australia’s star centre Maker soon gave them a lead they wouldn’t relinquish for the rest of the quarter. The period ended with Hunt – the stand-out Kiwi player in the first with 8 points and 3 rebounds – nailing a triple at the buzzer to narrow the Aussies lead to 19-23.

The second quarter saw Australia employ a stifling full court defence that forced the Tall Blacks into multiple turnovers – the Aussies using this to go on a 9-0 scoring run and build a 37-26 lead mid-way through the period. That became a 49-37 lead for Australia going into the half, on the strength of their shooting (50% vs 39% for NZ) and by holding a 23-17 rebounding advantage; turning their 5 offensive rebounds into 11 second chance points, while also shooting 7/17 from beyond the arc.

In addition to Cameron’s 10 points, Hunt helped keep the Kiwis in this game with his 11 points (3-3 from downtown) and 4 rebounds, while Australia’s Mitchell McCarron had 11 for Australia and Sam Froling registered 7 points and 5 rebounds.

Both teams started cold to open the third quarter. Australia make the first bucket after two and a half minutes had gone by, before New Zealand made a thrilling run to cut the lead to six – beginning with a triple from Perrot-Hunt and a driving layup from Hunt, and culminating in a Smith-Milner three; the Kiwis hitting 3-5 from outside to start the quarter.

Maker soon went on a personal 7-0 run at the three minute mark, including a triple and a dunk to build Australia’s lead back to 10. That lead would extend to 14 after Australia’s suffocating defence forced a trio of Kiwi turnovers, which the Aussies were able to capitalise on for easy scores. They’d carry a 66-54 lead heading into the fourth quarter.

The final period saw Timmins rising to the occasion for New Zealand – the big centre scoring 8 straight points from inside on a variety of moves, with Cameron finding him twice with excellent feeds, to narrow the gap to 4 points with 4 minutes left to play.

Down by 6, a four-point play cut by Perrot-Hunt cut the deficit to 2 for New Zealand. But huge triples by Maker and Mcdowall-White extended the lead back to 8 with 2 and a half minutes left, before a Smith-Milner triple bought it back to 5. A costly turnover gave Australia possession, forcing the Kiwis to foul – the Aussies holding on for a 9-point win and a place in the Asia Cup grand final tomorrow.

The Tall Blacks will still have a chance to medal at this Asia Cup, when they take on either Jordan or Lebanon tomorrow night at 10.30pm NZT in a battle for 3rd place.