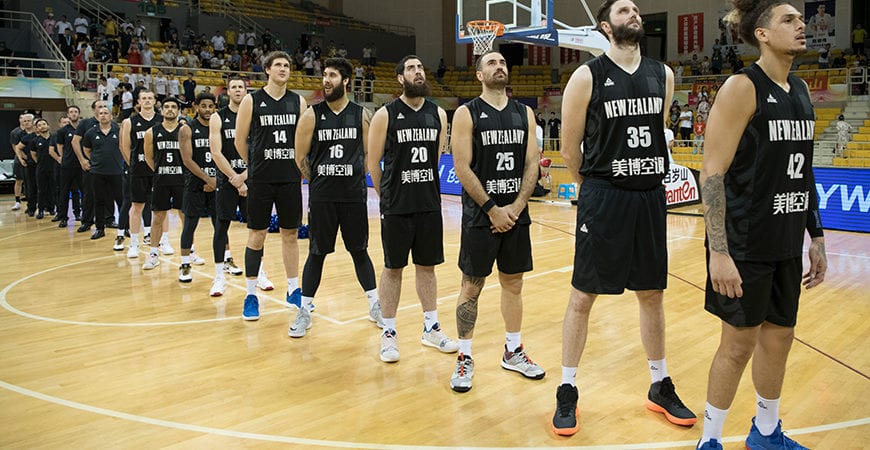 The MBO Tall Blacks rounded out their World Cup preparation with a superb victory over world number 13 ranked Italy, the New Zealanders firing up big time in their third game in three grueling days to upset the Europeans 88-82 in Anshan, China.

The team in black was in control throughout, establishing an early lead on some hot outside shooting that saw 7 three balls drop in the first quarter alone, and nine at halftime (from 16 attempts). The Italians simply had no answer to the quick ball movement and pace of the New Zealanders, who defied the schedule and the odds with one of the bigger wins in New Zealand basketball history.

Corey Webster led the team superbly, not only with his 21 points (seven of 16), but with six assists, a figure matched on the night only by his brother Tai. The support cast was deep, with Ethan Rusbatch continuing a superb tour with 11 points (three of five from deep), while Isaac Fotu did some damage in the paint in the fourth quarter, ending with 11 points and six rebounds, but everyone stepped up and made their shots tonight.

The Tall Blacks shot the three at 50% and had 18 assists compared to just eight for the Italians, underlining their philosophy of sharing the ball and looking for one more pass and an open look.
Head Coach Paul Henare was delighted for his players, not just in the performance, but to savour a victory over a world-class team prior to heading to Nanjing and their first group game against Brazil on September 1st.

“We have been battling hard for a few weeks now and the schedule we have put these guys through – I think this was our fifth game in seven days against quality opposition, and that has been tough. For our boys to be able to hang mentally tough and walk away with a win was really pleasing for them to get the reward and that winning feeling against a world-class side.”

Henare said the obvious improvement was in the shooting stats, with the open looks being converted tonight.

“We are a team that relies on three-point shooting, it is our job as a coaching staff to provide a system that gets them enough open looks. We felt like we had a few against Serbia last night but couldn’t knock them down, but the game is a lot easier when you keep the scoreboard ticking over from the three.

“To go 15 of 30 speaks volumes for the guys hanging tough. Our bigs have shot the ball phenomenally well, Rob Loe has been very consistent, and Tohi Smith-Milner has come on superbly and been consistent from the three for us, but I am happy for all of our guys to knock those shots down.”

Henare was also pleased for his captain on the night Corey Webster, in an all-round performance with plenty of minutes at the point with Shea Ili on limited rations and Jarrod Kenny not suiting up due to injury.
“Corey is one that has seen his body take a hammering over these five games and he has put in a good body of work so for him to carry us down the stretch, make some big plays – not just his shot making but he had six assists and some of them were key. We trust him, we want to put him in situations where the ball is in his hands and we trust him to make the right decision.”

One stat that glared out at the head coach that he would rather not see however was the turnovers, with 25 coughed up by the Tall Blacks.

“We have actually been pretty good up until tonight, maybe it is a combination of mental fatigue, but we were well short. We lost the possession game; we lost the rebound battle and turned the ball over too many times.”

Henare was also pleased to see one of his young leaders back on the floor, with Shea Ili returning from a groin strain, having missed both the France and Serbia games.

“The other great thing about tonight was we got Shea Ili back on the floor. He would loved to have played more but we had to restrict his minutes and I thought his impact, the defensive energy he brought to the game and the ability to push the ball and get under the foul line was really good. It is great for us to have him back into the group but great for him, we were doubtful he was going to be fit enough to play, but the medical team has done a great job this past week or so, so for him to get through 12 minutes, I am really happy for him.”

The Tall Blacks now head to Nanjing to put the finishing touches on their preparation and freshen up for the match against Brazil on 1 September, buoyed by a quality win against a quality Italian side with plenty of NBA and Euro League experience on their roster.