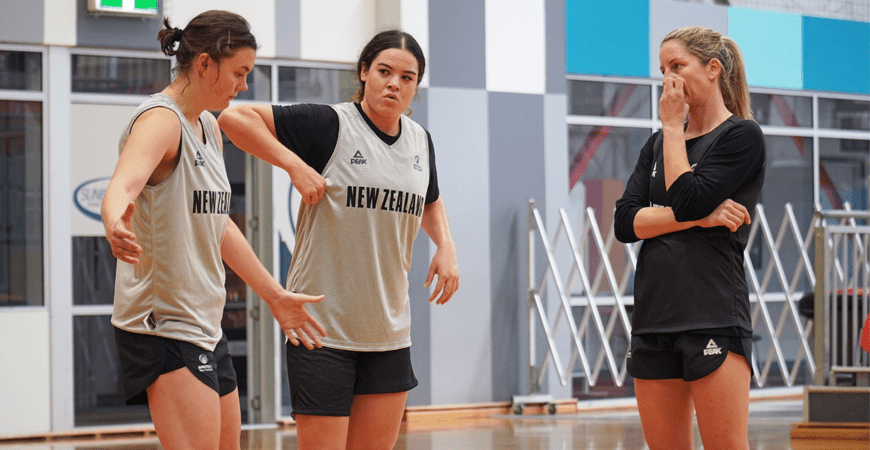 Two games into their Australian Tour and although the Tall Ferns have yet to pick up a win against their WNBL competition, they are achieving the number one goal set out for this squad – to provide young female athletes with valuable experience against tough international squads.

On Saturday the Tall Ferns played their first game against the Southside Flyers in Melbourne, falling 77-64 to the home team. Less than 24 hours later they faced the Bendigo Spirit in Sunbury, dropping a 84-46 result – with fatigue a factor for the Kiwis in the second half.

This is the first time since the FIBA Asia Cup in October 2021 that the Tall Ferns have been able to come together as a squad, let alone play a game against another team. And in playing their first games in over a year, the Tall Ferns begin their build-up towards the Paris Olympics in 2024 – with the FIBA Asia Cup in July 2023 looming as the major qualifier for this pinnacle event.

Tall Ferns head coach, Guy Molloy says that he has been impressed with the fortitude of the squad so far.

“The players all came together for the first time late last week, they’ve had four trainings in two days before playing a tough game [against the Flyers]. Then twenty four hours later, they’ve had to play an even harder game against the Spirit – so it’s been a challenge for them,” says Molloy.

“The reality is that we’re here playing professional teams from one of the best women’s basketball competitions in the world, and they’re getting ready for their new season – so the competition has been unbelievably tough so far, and I think that’s been perfect – it’s exactly what we’re after.

“These are conditions that replicate what they’ll encounter at world events, so it’s been a terrific eye-opener for some of them and exactly when I wanted to get out of these first two games. And they’ve all responded well.”

Molloy says that even though the result against Bendigo Spirit on Sunday was ‘tough’, there is plenty to like about what they squad has achieved so far.

“We played a lot of good, tough team defence in both games played in the weekend, and we showed defensive improvement in the second half of both games – which was in response to the challenge we set them at half-time.

“At the end of the day the result of either game doesn’t really matter, as being a friendly they don’t; it’s about getting the players to have an understanding around how we want to play as a team and what our national style of play is. I think we shot the ball well in the first game as we were fresher, but the players were weary on Sunday so those same shots didn’t drop – it’s understandable in this setting.”

Molloy says that this tour – and the level of competition they are facing – is especially beneficial to the young players, many of who are making their Tall Ferns debuts on this tour.

“We have three teenagers in the frontline – so three out of our four post players in this squad are teenage girls. They’re getting an early taste of what it means to be a Tall Fern which they probably wouldn’t have gotten otherwise, as normally we’d have other, more experienced players available for this squad.

“So it’s about earning a lot more about our style of play, about how hard they’re got to work and how good fundamentally good they’ve got to be to play at this level. I want them to have a dream to be a Tall Fern at a major event, and this is their first step towards achieving that goal if they want it.”

Looking ahead to remaining two games – versus the Melbourne Boomers on Saturday 22 October, followed by a re-match with the Bendigo Spirit the following day – Molloy knows what he wants to see from his squad.

“I want to see progression. The strategy of the tour in terms of style of play has been very focussed on several things; to educate and upskill the players in how we move the ball, how we want them to pass and make good decisions.

This is all vitally important if we want to do well on the big stage, as a small team which traditionally employs a small-ball style of play.”